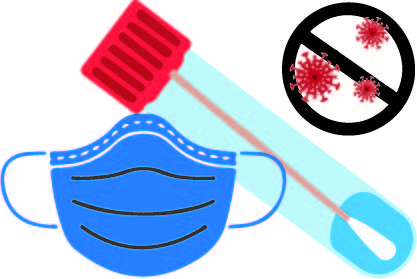 On Feb. 16, there were 624 new cases of COVID-19 and 38 deaths confirmed in Wisconsin, with 56,384 new cases and 1,217 deaths nationwide. These numbers, while still significant, follow a trend of declining infection rates.
The Wisconsin Department of Health Services reported 556,332 cases of COVID-19 in the state since the pandemic began last spring, with 4,603 cases reported from Grant County. The number of new cases continues to increase nationwide, with over 50,000 new cases on Feb. 16 added to the over 27 million already reported over the past year.
Despite these numbers, the rate of new cases has remained in a steady decline over the past month at both the state and nation levels, according to the CDC and Wisconsin DHS. The most recent state and federal mask mandates issued in January and the spread of vaccines seem to have effectively slowed the spread of COVID-19.
Vaccinations continue across the country with 55.2 million doses of the vaccine administered so far, according to the CDC. Wisconsin is currently in Phase 1b of its vaccination plan, which allows anyone over the age of 65 to receive the vaccine. Over 720,000 vaccines have been administered throughout the state, with over 3,700 given by Southwest Health, Platteville’s local hospital located just off of State Road 80.
UW-Platteville reported 10,086 tests given on-campus, with 30 positive tests since Jan. 19, which continues the local downward trend seen at the end of last semester. There have been an additional four off-campus cases, making a total of 34 cases of COVID-19 within the university community, according to the UW-Platteville COVID-19 Dashboard.
According to the most recent Platteville Common Council meeting packet, “[t]he Grant County Health Department has held several mass vaccination clinics in Lancaster and will continue to do so as vaccine is available.” The county also plans to continue community testing in Lancaster on Tuesdays and in Platteville on Fridays until sometime in mid-March. Testing in Lancaster is held from 11 a.m. to 3 p.m. at the Grant County Fairgrounds on Elm Street, and testing in Platteville is held from 11 a.m. to 3 p.m. at the National Guard Armory on Water Street. The City of Platteville is working with the county and Southwest Health to have the Broske Center available as a vaccination site should the need arise.
Over the past 11 months, 485,070 people have died of COVID-19 in the United States, with 6,204 deaths in Wisconsin, according to the CDC and Wisconsin DHS, respectively. Grant County has seen 79 deaths of people with confirmed cases of the virus.