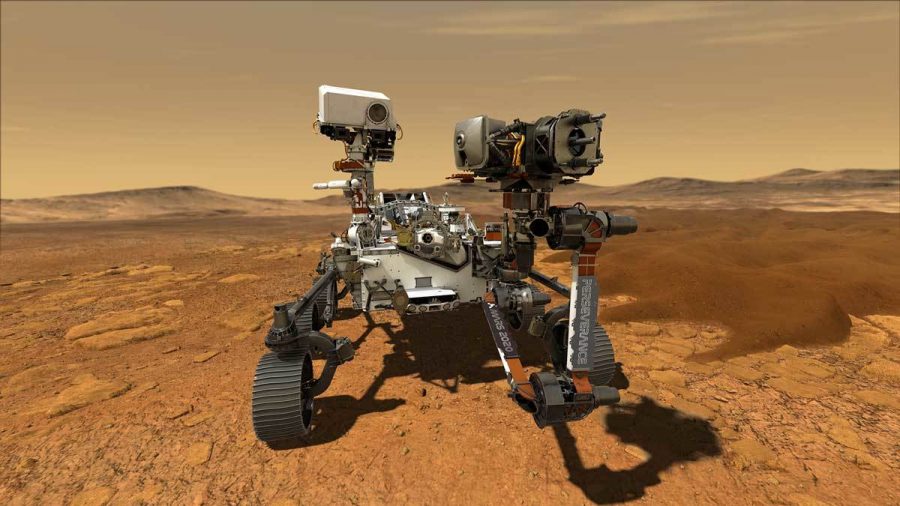 "This illustration depicts NASA's Perseverance rover operating on the surface of Mars" - from nasa.gov

On Feb. 18, NASA’s Perseverance rover safely touched down on its landing site in the Jezero Crater on Mars at 3:55 EST, bringing the Mars 2020 mission into its next phase. The primary objective of Perseverance and the Mars 2020 mission is to “[s]eek signs of ancient life and collect samples of rock and regolith (broken rock and soil) for possible return to Earth,” according to NASA’s official mission statement.
The landing of this latest rover presented more difficulties than the previous nine landings on Mars that NASA has conducted. Along with the “seven minutes of terror” – the time it takes any vehicle to land on Mars, during which it must go unassisted due to the communication lag between Earth and Mars being 11 minutes – the landing site is “filled with cliffs, pits, sand dunes and fields of rock” rather than a smooth, flat location, according to the Associated Press, and the rover is the heaviest sent to the Red Planet yet.
Despite these additional hazards, Perseverance has lived up to its name and survived perhaps its most difficult trial. The mission team is testing the rover over the next month or two to ensure everything is functional before proceeding with next part of the mission.
The hazardous landing site was chosen due to Jezero Crater being identified as a likely site of an ancient river delta. Perseverance will explore the crater over the next two years, collecting samples and storing them in sealed tubes.
A future mission will collect these samples for return to Earth, where they will be studied using equipment too heavy or delicate for the journey to Mars. Although the mission is officially set to last only two years, the longevity of previous rovers — most notably Opportunity and Curiosity, the latter of which continues to collect and send data to Earth — sets a precedent for missions continuing well past their intended timeframes, which Perseverance may well continue.
The Mars 2020 mission began over six months ago with the launch of Perseverance, affectionately called Percy by mission staff, from Cape Canaveral, Florida on July 30, 2020. The rover is the most advanced of its kind, “[e]quipped with seven primary science instruments, the most cameras ever sent to Mars, and its exquisitely complex sample caching system – the first of its kind sent into space.”
After 203 days and an astronomical 293 million miles, the rover landed last Thursday and can truly begin its mission.
“Because of today’s exciting events, the first pristine samples from carefully documented locations on another planet are another step closer to being returned to Earth,” said Thomas Zurbuchen, associate administrator for science at NASA.
Perseverance’s landing has also contributed to the possibility of one day sending humans to other planets. Data collected from its advanced sensor equipment during the landing are expected to contribute to improving the safety of landing humans and heavier payloads on distant worlds.
Perseverance touched down Mars on Feb. 18.