The Big Payback Plays Back For UW-Platt 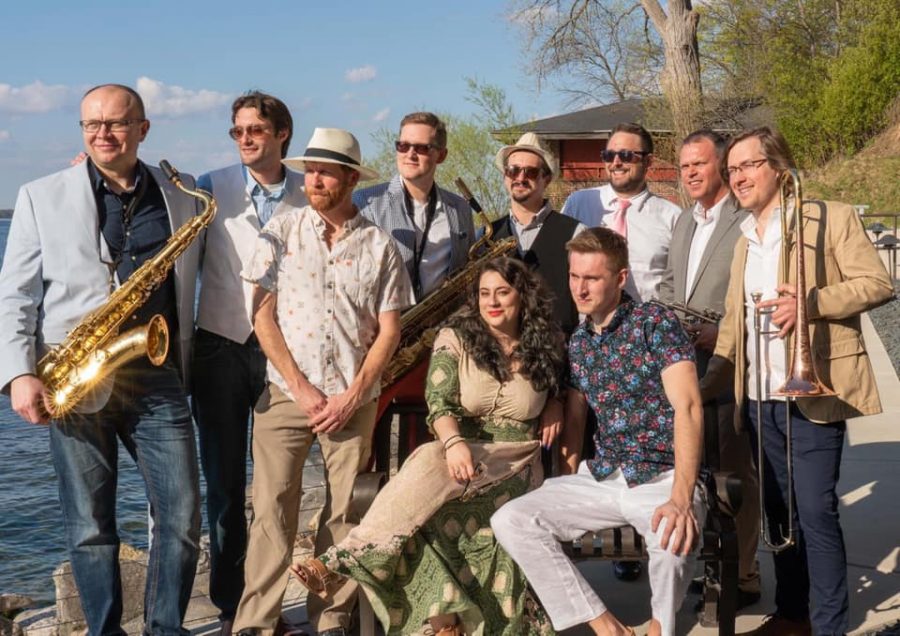 On Feb. 26, for the third performance of the 2021 Performing Art Series, The Big Payback released a recorded concert via YouTube.
The Madison-based jazz-rock group released for the Performing Art Series their last in-person performance before the pandemic. As stated on their website, it was “a very special 10-year celebration of our time together” and included rare and brand-new songs.
The Big Payback’s website also notes that sharing their art with UW-Platteville holds importance for another reason; Allen Cordingley, a saxophonist in The Big Payback, directs the Pioneer Jazz Orchestra and is the saxophone instructor for UW-Platteville.
The band opened with their well-known style of explosive, vitalizing jazz, leading with a powerful array of saxophone solos, bassist spotlights and an armory of percussion instruments.
Then, they marched onward in the performance with their triumphant, award-winning “Running with the Fire.” The song won Madison Area Music Award for Rock Song of the Year in 2017, and the album, “Animal Brain,” also won a Madison Area Music Award for Jazz Album of the Year at the same ceremony. Guitarist Kyle Rightley wrote all original material for the record with the addition to a Jimi Hendrix rendition.
Combining the smooth roll of jazz and the impactful delivery of rap, the band blazed forward with their anthem “Jackal in a Suit,” with vocals by Leah Isabel Tirado and by Rob Fury from a fellow Madison-based band, Bird’s Eye.
Vocalist and percussionist Luke Hrovat-Staedter led the next song, “Short and Sweet,” dedicated to his wife, with his wide-reaching vocal range and sweet jazz rhythm.
Next, the band played an original piece, “I Can’t Stop Loving You,” in which Tirado’s vocals expanded and exploded over the stage while the horn section complemented perfectly with well balanced dynamics from the bass guitars.
Tirado took to the microphone to share her sentimentality of the 10-year anniversary of the band. She joked, “had I known this was going to be my longest relationship, I would have asked for jewelry.”
Kyle Rightley shared a special piece he had composed for the anniversary. The piece rested well with a slower, calmer rhythm, accompanied by the matching presence of Tirado’s and Hrovat-Staedter’s soothing vocals.
Succeeding this, the band jumped into a series of spotlight solos for Jamie Kember the trombonist, Luke Hrovat-Staedter on the keys and Kyle Rightley on the guitar while throwing the attention to the members in the back, Jeff Weiss on the bass and Tim Patterson on the drums.
The time had come for the horn section to boast of their own sound, and they did so in great strides. David Buss rocked the baritone saxophone and Allen Cordingly soloed the clarinet and tenor saxophone.
To conclude the concert, the Big Payback performed what James Kember described as “the tune that brought us all together, ‘Lookin’ at Me,’” their very first song as a band. Fury of Bird’s Eye rejoined for an added rap twist.
Tirado reintroduced the band’s nine other members: Peter Baggenstoss, Jeff Weiss, Luke Hrovat-Staedter, Tim Patterson, Dave Buss, Allen Cordingley, Jon Schipper and band leader Jamie Kember.
In total, the Big Playback performed 14 pieces of varying jazz, rap, funk and rock style for their unexpectedly final in-person performance before the pandemic.
The schedule of the Performing Arts Series may be viewed at www.uwplatt.edu/pas. In order to purchase tickets, call (608) 342-1298 or visit www.uwplatt.edu/department/box-office. Tickets may also be purchased at the University Box Office, located in the lower level of Ullsvik Hall.