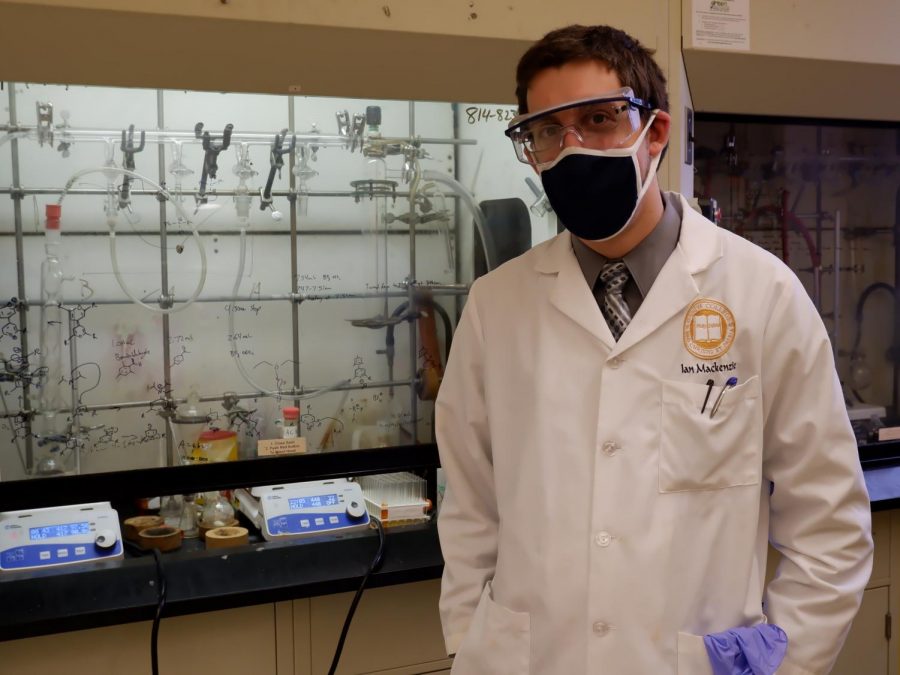 Dr. Ian MacKenzie is a UW-Platteville chemistry professor with a specialty in organic chemistry. He has been working on developing and studying new organic reactions powered by light for the last year, and hopes to apply his findings to the pharmaceutical and agrochemical industries.
During his undergraduate studies, MacKenzie enjoyed organic chemistry, but specifically, he was very interested in studying reaction mechanisms rather than product synthesis. In other words, his studies focused on why reactions function the way they do instead what the products are.
This interest in reaction mechanisms is what led him to spectroscopy, which uses light to study molecules. On a larger scale, the field of organic photochemistry is concerned with the chemical effects of light, which bridges the gaps between reaction synthesis and mechanisms.
At the center of his research, MacKenzie is utilizing dye molecules to mediate the reactions of interest. The dye molecule, which he calls a photocatalyst, absorbs the photons of light and becomes excited, meaning that it will give or take an electron from a nearby molecule called a substrate.
This substrate molecule is then extremely reactive, which means that it can undergo new modes of reactivity that would not be available under normal conditions. Under said normal conditions, the addition of chlorine, for example, to a carbon chain containing a double bond would alter the original compound so the double bond is no longer present and the chlorine will be bonded to the carbon with more hydrogen.
However, by utilizing the dye molecule and light, the chlorine will bond to the carbon that is missing an electron.
Essentially, carbon “likes” to have 4 things attached to it (lone pair electrons, bonds to other elements, etc). With the dye/light reaction, the carbon loses the electron bonded to a hydrogen molecule, meaning it has less “stuff” around it. The chlorine, then, would take the place of the hydrogen.
“This is just an example, but it illustrates the type of new reactivity that my research hopes to uncover,” MacKenzie explains.
At the moment, MacKenzie is focusing most of his attention on developing new dye molecules that can do these photochemical processes more efficiently than existing photocatalysts. Additionally, he has a secondary research project underway that is directly looking at synthesizing fluorinated aryl ether molecules, which has potential to be applied to pharmaceutical drugs.
MacKenzie’s primary research has the potential to pave the way to faster and more manageable drug reactions, which in turn could further the production of pharmaceuticals and agrochemicals within the chemical industry.