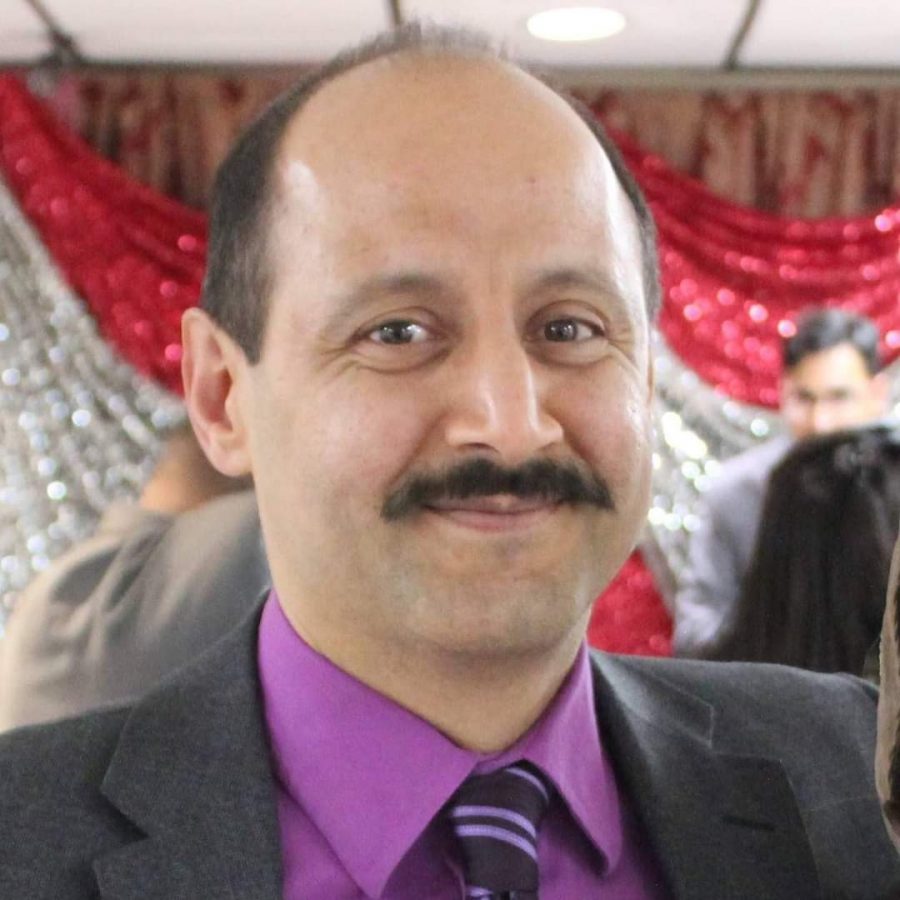 What is your educational background?
Born and raised in Pakistan, Dr. Upal began his higher education in Pakistan, earning a degree in physics. Back then, Pakistan operated similarly to the old British college system, in which the undergraduate degrees required two years of college education.

Upal completed his degree in physics and math in 1989. Shortly after, in 1990, his family moved to Canada, where he continued his education.

He began at the University of Saskatchewan, earning a bachelor’s degree in computer science in 1993. He utilized credits from his physics and math degree to complete it more quickly.

After finishing his master’s degree, Upal marched forward to his doctorate.

“My Ph.D. was on applying machine learning to what are known as automated planning systems. These are the systems such as GPS …We tell them, ‘this is my destination, this is where I’m currently at,’ and then they give you a route from here to there. Or, if you’re playing a game like chess or checkers, ‘what is the sequence of the moves that I can execute to win the game?’” said Upal.

Incorporating machine learning into these sorts of devices allows for those programs to learn to improve their performance over time.

“The game-playing system sees your performance as you play against the system,” Upal continued, “and learns something from you, and therefore becomes better over time.”

Upal sought to design an algorithm to use with a specific type of planning system called a partial order planner.

“They used to be the newer planners back in the 1990s, they’ve now been superseded, but back then they were relatively new,” said Upal.

What caused you to change from studying physics to studying computer science?
“In Pakistan, I never had seen a computer much less knew what computer science was. When my family moved to Saskatoon, Canada, I went to see the Physics department chair when I enrolled at the university. He said, ‘in order to fulfill the science requirements, (you need) a science course. This computer science class is being offered over the summer. Since you don’t know anything about computers this will be good for you,’” said Upal.

In 1990, computers were both uncommon and incredibly exciting.

“Somebody was able to log into an FTP [file transfer protocol] site at the University of Washington … I’m sitting here in Saskatchewan and I’m looking at the computer games and other programs they have, and I can download them. The connection would inevitably break every few minutes, nothing was reliable back then, but it was just that everybody was excited,” said Upal.

Not only was the technology fascinating and new, but the community was welcoming.

Numerous exchange students from India who were studying computer science befriended Upal and, combined with his interest in the new science, caused him to formally change his major.

Upal continued, “It was a brand new way of looking at things … computer science gives you a different logical, step-by-step, algorithmic way of thinking about really everything.”

Aside from expanding the individual’s world view, computer science fits into the historical development of how the world views itself as well.

“Back in Newton’s time, when we used to think of everything as a clock, they’d think of the universe as a clock, the human mind as a clock. Then, in Einstein’s time, energy became the dominant metaphor for everything. It’s the same thing now, we live in a computer science world. Computers just happen to be the latest metaphor that we now use to explain everything,” said Upal.

How did you become interested in teaching?
“I always thought I was going to be a teacher. My mother was an elementary school teacher, so teaching to me has always been a noble profession,” said Upal.

Upal also reflected on his time after completing his education with working in the computer science industry and in government positions.

“You think about the meaning of life, and the purpose of life and then, to me, teaching always has (been among) those noble professions … I took some breaks here and there, but I’ve always wanted to come back,” said Upal.

His teaching journey and career began in 1999, when he started to defend his dissertation for his doctorate.

Upal searched for teaching opportunities at Canadian universities around this time. The tech bubble was just starting to build up, and computer science educators were in high demand. He had lined up multiple interviews, but the process was cut short when he was offered a position at Dalhousie University on the spot after arriving.

“I walk into the dean’s office,” explained Upal, “and he says, ‘What if, instead of doing your interview, save you your time and my time, what if I just offer you the job now?’ And I said, ‘What?’”

After teaching at Dalhousie in Halifax, Canada for two years, he accepted a position in Washington D.C. working with a Defense Advanced Research Projects Agency (DARPA) contractor to design intelligent decision-making systems for defense applications.

In a couple of years, the small contractor went out of business. At this time, Upal decided to return to the education sector, which had become highly competitive.

His search was successful, and Upal taught at the University of Toledo in Ohio from 2003 until 2007.

During the summer between Toledo and Occidental, Upal worked in a fellowship position with an Air Force research lab, at which he heard of the cognitive science openings at Defense Research and Development Canada (DRDC), the Canadian equivalent of DARPA.

The following year in 2008, Upal returned to Canada to conduct research with the DRDC until 2017.

However, this position began to raise moral concerns for Upal. Though never working on classified projects, he grew worried about the possibility that his research would be used to cause harm.

“To be honest, I don’t know if they ever used anything that I developed …still, there was always that possibility that, you know, something bad could come out of anything that I’m doing,” said Upal.

He decided that he would return to teaching, and he joined the Department of Computing and Information Science at Mercyhurst University in Pennsylvania, where he met Dr. Patrick Byrnes and Dr. Sarah Getz, who are also new faculty at UW-Platteville this year.

He stayed with Mercyhurst until 2020, when he moved again to work at UW-Platteville.

In which department(s) will you be teaching at UW-Platteville? What type of classes will you teach?
Upal serves as the chair for the Computer Science and Software Engineering Department and teaches courses on artificial intelligence and machine learning.

“My favorite part of this position (as department chair) is talking to current students, prospective students and families of prospective students. That is the most exciting and most interesting part … I really enjoy meeting with people, I enjoy getting to know new people,” said Upal.

Do you have advice to share with students?
“One thing that I’ve learned in my life is that the earlier you can figure out your passion in life, the better. I think that one of the real strengths of the North American liberal arts broad-based education system is that it forces you to study things outside your major and minor,” said Upal.

Upal also spoke on the importance of not chasing the jobs and, instead, learning where your interests lie.