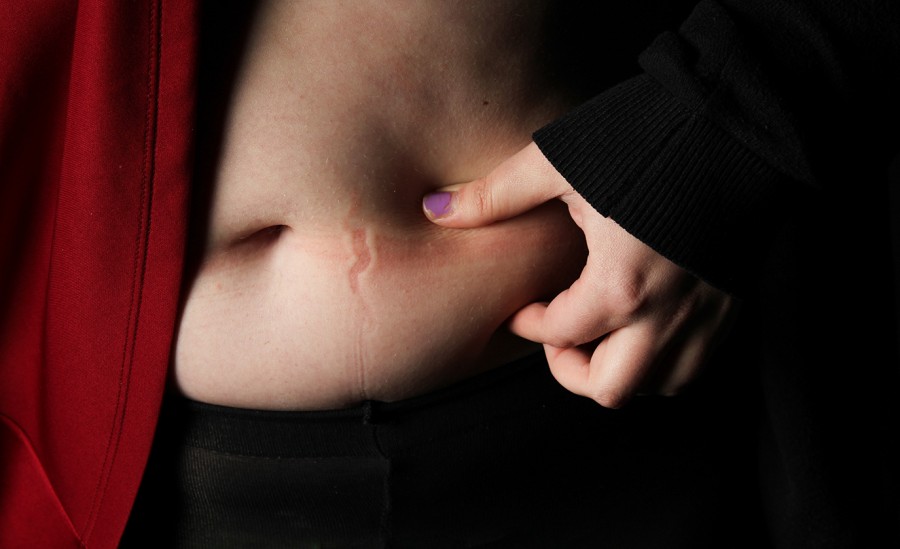 The average American woman is 5 feet, 4 inches and weighs 165 pounds, according to nationaleatingdisorders.org. The average clothing size of American women is size 14 to 16.

I was always told to not touch my body with bad intentions. That my body is something that I should cherish because it is one of a kind and I am so lucky to have it. That loving the skin that I am in is the most important thing that I can do for myself. Everything changed when I got called fat for the first time when I was 15 years old. I started to look at the way the media portrayed women’s bodies and how I could fit into what society deemed as “beautiful.” I started to do whatever it took to be thinner so that I could also be seen as beautiful. I started to restrict what food I was taking in. It got to the point where if I felt guilty about what I was eating I would make myself throw up to try and feel better. I didn’t know that what I was doing could be seen as an eating disorder. I just wanted to be happy. Eating Disorder Awareness week, from Feb. 21-28, provides insight on these issues.

The three main eating disorders are Anorexia, Bulimia and Binge Eating. There are biological, environmental and psychological factors that go into these disorders, not just having low self-esteem. However, the number of people who have been diagnosed with eating disorders is actually a small number.

“We miss a larger segment of the population that is dealing with eating disorder behavior.  Not necessarily a clinical diagnosis, but a behavior that causes problems for them which includes food and body image issues,” Director of Counseling Services Deirdre Dalsing said.

I was a cheerleader at 15, and every girl on the team was smaller than I was. There’s something damaging about being assigned to the bottom of the pyramid, but there I stood pretending like I didn’t mind having to lift these girls that I thought were half my size above my head. All I knew was that I wanted to defy gravity like my teammates.

I constantly found myself pinching at what I thought were piles of fat on my stomach praying that they would go away. Even though I was losing weight, I would push myself to eat 100 fewer calories each day and to run that extra lap during practice, but still it stayed.

Dalsing said that one of the indicators of someone having an eating disorder is when food becomes more of a conflict than what it should be, which was my mindset. I would not stop hurting myself in order to get the body that I wanted. I was never happy with the way I looked.

One of the leading symptoms of someone who has an eating disorder is keeping their behavior a secret, which is what I did because I felt so ashamed. Dalsing said that eating disorders tend to be shame-based disorders. Talking about them may lead to embarrassment which can cause people to not want to admit what they are doing to themselves.

Another one of the symptoms that I took on was seeking approval from others.  I would ask my friends if I looked “fat” or “ugly,” but never believed them when they said that I didn’t.

“Once there is a distress on what they look like, there’s more of a risk of an eating disorder,” Dalsing said.  Other symptoms may include skipping meals often, over-exercising and having conflicts with others about eating.

I only started to make peace with my body when a close friend told me that she was worried. She noticed my eating patterns and knew something wasn’t right because she had gone through the same thing. I leaned on her for support and she was able to guide me down the path of recovery. Dalsing said that a person has to truly recognize that they have a problem otherwise it will be very hard for them to get help.

It has been four years since I last made myself throw up. I have gained and lost weight in that time. There are days when I look at myself in the mirror and hate the person that stares back at me, but I know that those days are temporary. Society made me believe that being skinny means that you are healthy and happy, but now I know that healthy and happy looks different on everyone. Eating disorders do not have a size limit.

We need to start teaching kids at a young age to create a healthy relationship with food and not treat it as something evil.

As a future educator, I need to project a healthy body image so that one day I won’t have to see one of my students struggle with the same issues that I did when I was their age. One way that we can do this is to start normalizing talk about positive body image and mental health.

“I will not use the word ‘blessed’. Some people will say that a person is ‘blessed’ to be skinny or a certain size. I do not use that word because to me, that supports [the idea] that they are so fortunate and lucky and that means that the rest of us aren’t lucky and it’s not fair,” Dalsing said.

I used to think that being called fat was the meanest thing that someone could say to me, but being fat is not synonymous to being ugly. What I have learned throughout this journey to self love is that fat is not a bad word. I know now that eating disorders are not beautiful or glamorous, but loving yourself the way you are is.

I would like to issue an apology to my body and the ways that I hurt it. You did not deserve that.