Learning to love and be kind to yourself 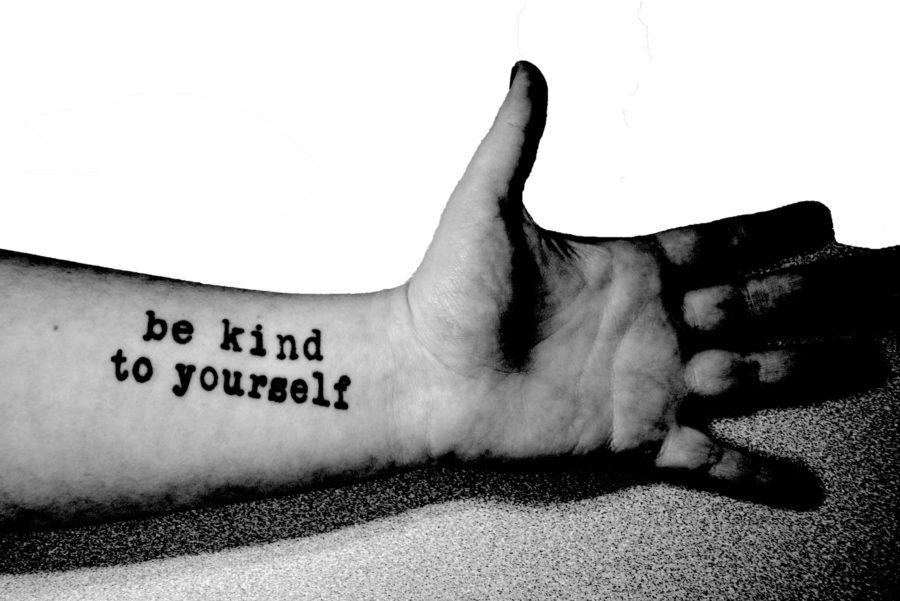 Senior professional writing major and Exponent Editor-in-Chief Mackenna Moralez shares her self-harm story and encourages students to remind themselves daily to “be kind to yourself.”

I would always tell myself to press harder.  The deeper I put my razor into my skin, the more I would be able to feel.  That was all I needed, a reminder that I wasn’t as numb as I felt.  The only way I could do that was by cutting myself.  Track marks traced my wrist and thighs, so that they were easily covered.  I loved being in control of who hurt me and when I cut myself the only person I could blame was me.

On Feb. 16 the Doyle Center hosted Self-Love, a discussion focused on self-harm.  The point of the discussion was not to convince anyone to stop self-harming, but to know the warning signs of someone that is hurting themselves and to see what self-harm looks like on the University of Wisconsin-Platteville campus. Counselor Teresa Miller led the discussion, as she pulled up a series of anonymous polls asking the attendees why they thought people self-harmed.

I typed into my phone “to remember what it’s like to feel”, hit send and watched as my answer popped up on the screen.  I loved cutting myself solely for that reason.  I used to walk around campus my freshman year not being able to feel anything but sadness.  I would slightly smile at things that were supposed to be funny and hoped that no one would question the cuts on my wrists.  If they did, I would come up with excuses that seemed convincing enough, but no one knew that I was doing the damage to myself.  When I cut myself, I was able to let the sadness escape and feel something else besides it.  I felt a controlled pain.

Miller went on to explain that the biggest population of people to self-harm are between the ages of 13-18.  The older you get the less likely you are to self-harm.  However, social media is becoming a large influence when it comes to self-harming in both positive and negative ways.  Attendees went on to say how they gained support from people across their various social media accounts when they felt the need to self-harm.  One member explained how social media websites such as Tumblr and Facebook have an anonymous report system that can alert the user that someone cares about them if they post something unsettling.

disappointed I was in myself.  At this time in my life, cutting had become habitual.

It was the only thing that was able to make me feel better, but afterwards I just ended up feeling worse.  It was another part of my body that I had to hide, another scar that I had to make an excuse for and I couldn’t help but feel so ashamed.  My body didn’t deserve the things that I was doing to it, but I needed to self-destruct.  I wanted my body to match what my mind looked like.  I got a message later that day from one of my friends asking me not to cut anymore because I deserved to be happy.  It was one of the things that helped convince me to stop.

“It’s not an attention-seeking behavior,” Miller said.  “Most people don’t want people to see their scars.  We go to what works, what our habits are.”

The last time I cut myself was on May 11, 2014.  It was the deepest cut that I ever gave myself.  I went to sleep that night with a washcloth pressed against my wrist to catch the blood and made silent prayers that I wouldn’t wake up the next day, but I did and I am glad.  If I died that night I wouldn’t have ever saw my best friend get engaged, I would’ve never gotten to see my favorite band in concert and I would’ve never heard my niece say my name for the first time.  There’s so much more to life than the numbness that you can feel.  It goes away, eventually; you just have to give it time.  I’m almost three years clean, but there’s not a day that I don’t think about it.  I get asked about the scars on my arms on a regular basis.  Just because they’re fading doesn’t mean that people can’t see them and wonder what happened.  Having to explain what it felt like to shut down is not something that I want do, but talking about it can help someone else who is also struggling.

Self-harm isn’t just self-inflicted wounds.  People can self-harm by drinking, abusing substance and participating in risky behavior.  All these ways can be prevented if you replace them with positive activities like running an ice cube up and down your body, coloring and listening to music.

“Sometimes you have to ask yourself ‘can you wait five minutes?’ You possess the skills to love yourself, and sometimes those feelings may be overwhelming, but feelings are normal,” Miller said.

If you or someone else you know is struggling with self-harming University Counseling Services can be reached by telephone at 608-342-1891, and is open Monday and Friday from 8 a.m to 4:30 p.m and Tuesday, Wednesday, Thursday from 8 a.m. to 8 p.m.