University of Wisconsin-Platteville students bring love and deception to the CFA. 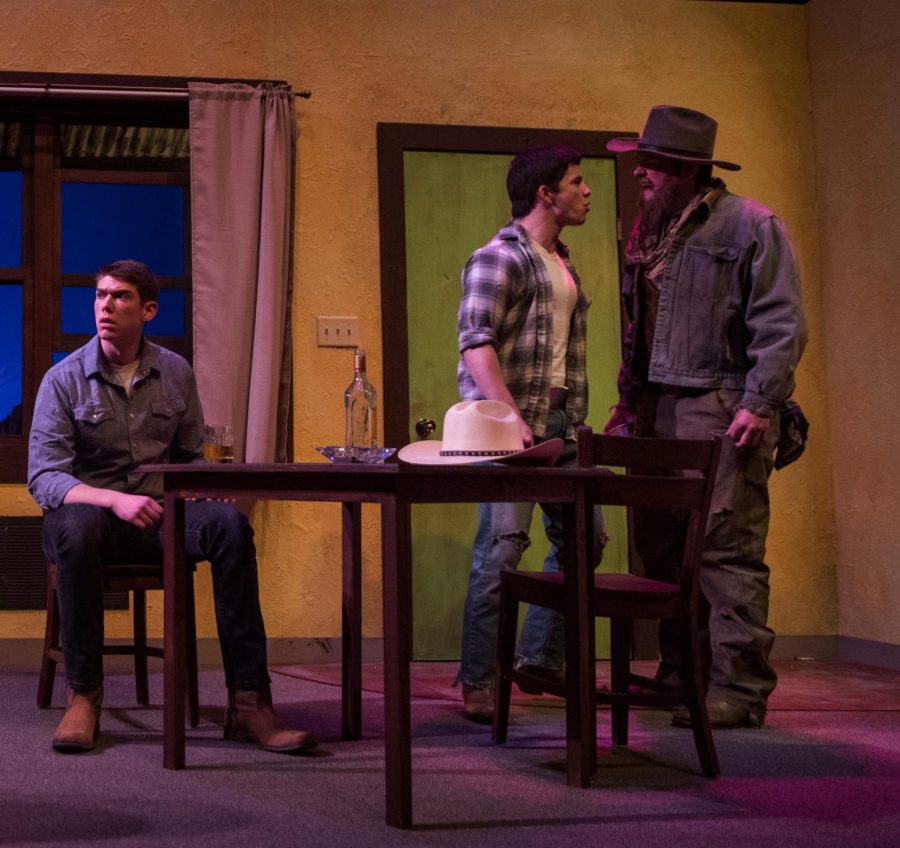 The Platteville Pioneer Players performed Fool for Love, written by Sam Shepard and first published in 1983. Shepard wrote this play shortly after leaving his wife, O-Lan. He described it as “the outcome of all this tumultuous feeling I’ve been going through this past year…it’s a very emotional play, and in some ways embarrassing for me to witness. But, somehow, [the play is] necessary at the same time.”

Fool for Love had its first performance at the Magic Theatre in San Francisco on Feb. 8, 1983.  It had its New York City premiere at the Circle Repertory Theatre on May 26, 1983, later transferring to the Douglas Fairbanks Theatre. The play was also performed in London.

Eddie (Logan Eigenberger) and May (Beth Wallace), two lovers doomed to an incestuous fate who continuously contradicted each other’s truths as the play gradually wore down the barriers between love connection and habitual obsession. The southern accents added to the exaggerated feeling of maddening simplicity, which seemed to be a key part of the setting. The focus was not on the set, but on the ferocious emotions that were explored by the actors from start to finish.

Inside May’s ragged motel room in the Mojave Desert, all the audience could see was a sparse bedroom and a bathroom. Eddie had already entered, back after yet another long spell away from May. May, who was curled into herself on the bed trying desperately to contain her love and hate for Eddie, was a picture of internal struggle.  She clung to him when he came near but hit him when he moved to go. She screamed for him to go but called him back before he could leave. She kept him on a proverbial yo-yo string that was symbolic of her own inner conflict about her feelings toward him.

Both characters could go from defeated to undefeatable in a matter of seconds, illustrating the absurdity of the passions that drove them. The entire first part of the play was a loud and physically vicious struggle between the two doomed loners.

Eddie was the fruition of his father, The Old Man (Jon Hutson), who was actually on stage for most of the play.  Well, kind of onstage—he hung on the outskirts of the set, almost looming on his children’s subconscious. Though it can be inferred that he was seen by both characters, May barely took notice of him but to hear him speak. As the play unfolded, The Old Man called Eddie a “fantasist” and claimed that what is true in the mind is “the only true realism”. The Old Man served to push the dream-like quality of the production forward, breaking the barriers and forcing the audience to question what was real, even within this already fictitious story.

May changed into a seductive red dress right in front of Eddie, proving their lengthy past with her comfort. May in the red dress seemed to be a reflection of the May in Eddie’s mind—the May at her “best” and most attractive state.

Eddie confessed to being May’s half-brother only when her suitor Martin (Jason Hackbarth) arrived. He told Martin his side of the story, with The Old Man chiming in every once and a while, but only Eddie could hear him. It became clear that The Old Man had two separate families who did not know about each other until it was too late for May and Eddie.  Eddie’s story was tragic, yes, but it ended with a declaration of love for May.

May was not so sweet about the tale, telling how it really was for her. May’s mother, “the other woman”, crossed into The Old Man’s other life, breaking an “unspoken agreement”. Soon the audience became aware that when May and Eddie fell in love, May’s mother tried to convince them to stop. However, no matter how repulsive they found themselves for it, they could not unlove each other. Because of this, Eddie’s mother “[blew] her brains out.”

At this point, Eddie was defeated. The Old Man urgently begged Eddie to stand up for “the man’s side of the story,” but instead he added that his mother committed suicide with his father’s gun. In this way, Eddie defied The Old Man’s version of the trauma which had been railed into his head from adolescence.

Eddie is the reincarnation of his father and both he and May hate that about him.  May despises herself for falling for a man just like her father, just like the man that ruined her mother.

The symbolism of the color red was plentiful in this play which set the tone very well. Red is the color equally symbolic of love and hate, the two emotions that are most likely to drive a person mad. May’s mother’s red hair, May’s red dress, the red fire outside the window and the red motel sign were all beacons of the madness that ensued at a tiny motel room in the Mojave Desert.