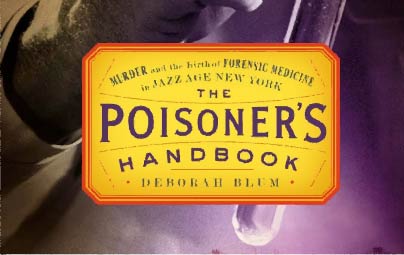 At first glance, the Poisoner’s Handbook by Deborah Blum will merit a second look at the title and a third thought at reading it.
However, the book is the exact contrary to the otherwise assumed how-to guide on killing with poisons and toxins; rather, Blum accounts the stories of the Charles Norris and Alexander Gettler, who fought tediously against the common, and uncommon, criminal poisoner.
The Poisoner’s Handbook specifically follows the adventure of toxicology in 1920s and 1930s New York City. The city, being tired of drunken coroners appointed by lousy mayors, hired its first medical examiner: a dedicated professional, Charles Norris.
Once instated, Norris recruited an equally dedicated Alexander Gettler to his medical examiner’s office. Gettler served as the founder and director of the toxicology laboratory, and, in broader sense, as a chemist worthy of praise.
Their story – the efforts put into researching poisons, toxins, and otherwise harmful substances to the human body, their pursuits of justice for the victims of careful, murderous plots and their relentless hunt for proof of guilt or innocence – are categorized neatly in twelve chapters, covering eleven different poisons.
Blum presents the poisons, respectively in this order: chloroform, wood alcohol, cyanides, arsenic, mercury, carbon monoxide (part one), methyl alcohol, radium, ethyl alcohol, carbon monoxide (part two) and thallium, as a survey of Norris’s and Gettler’s scientific process.
The Poisoner’s Handbook is more than a simple recounting of such progress. It strives on a deeper level to recount the journey of bringing better justice into a world of murder and hatred – that there is hope, for the innocent to walk free and the dead to rest easily.
I would recommend reading the Poisoner’s Handbook to anyone who enjoys a heartwarming read in which reality’s harshness is cleared by the persistent, benevolent work of men and women.
No doubt, reading Blum’s work will move you to tears. It has done that to me many times.
As I close the book after reading its epilogue, I would like to include the then-serving Staten Island medical examiner’s letter to the Norris family upon Charles Norris’s passing:
“In sending my small contribution [of money] I am expressing my gratitude to the Chief for his friendship, for the many personal acts of assistance, for his extremely generous and whole-hearted support when most I needed it in my early days in the office, for his stimulating and encouraging words and cheery smile specially at moments when the difficulties of the office made all the world rather bleak.”