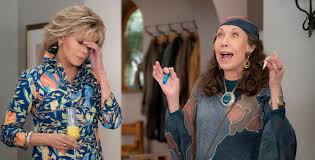 still from the show

1.) “Grace and Frankie”
With an 89% on rottentomatoes.com, this show is a must-watch while our stay-at-home order is in place. I remember freshman year when I first watched this series while in a friend’s dorm room; I was immediately hooked after my first episode. Since that day, I have watched this series all the way through three times and counting, and it still hits the same. The show follows the life of two elderly mothers, Grace and Frankie, who have been rivals for as long as they can recall. However, they discover that their husbands have had a secret love for each other when they vocalize their plan to get married, and the two have to start relying on each other to get through this difficult situation. This series is full of dramatic humor that will keep your head hopping from scene to scene. This show can really make you feel a roller-coaster of emotions and you can easily become attached to the characters as they undergo a variety of circumstances.
2.) “Sex Education”
Sex education: a class we all had to take and just did not enjoy the environment of. However, “Sex Education” is different from our own experiences. A socially stubborn student, Otis, doesn’t have experience in lovemaking, but he gets quality information from his sex therapist mother, Jean. At home, Otis is surrounded by talk about sex and relationships, and even booklets and videos that have made him knowledgeable on the topic. Some students learn about Otis’s home life and use it to improve his status at school and allow him to turn high school love dilemmas back into love birds. I highly recommend this British comedy-drama series for all students; there are some scenes that may make you want to look away, but it’s just too interesting to do so.
3.) “White Collar”
“White Collar” is a suspenseful crime show that will keep you guessing. The main character, Neal Caffrey, is an intelligent criminal who had been dodging an FBI agent, Peter Burke for years until, one day, Neal made a mistake and got caught. Shortly after being brought into custody Neal managed to escape a top security facility and was yet again on the run. Not long after his escape, he decided that he no longer wanted to run and negotiated a deal with the FBI; he would help them find long sought out criminals in exchange for his freedom. This series is full of sharp and unexpected turns, and the intelligence of Caffrey will impress any audience. I remember learning a thing or two throughout this show and it is rather shocking how easy Neal makes his job seem. Neal is always one step ahead of the game and this show will keep you eager to see what crazy idea he will have next.