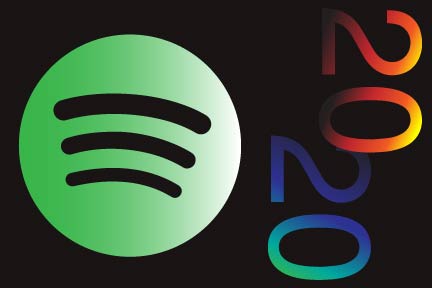 Ohohoho ahhhhh! You know what time of year it is? That’s right – the ending. And, you know what that means: Spotify’s year in review. As per usual, it’s time to introduce my top ten songs of the year.

Ten is “Posters” by Youth Lagoon, one you’ve heard me talk about in the past. The song is still as good as ever with that lonesome feeling of losing a friend because you were true to yourself and found out who you really were.

Nine is “Heat Waves” by Glass Animals. Wow, you want to talk about watching a friend drift away? In this case, it’s watching a relationship falling apart and knowing you have to leave for the better: not for yourself, but for them. But, instead of being this really depressing piece, it’s got a kicking back track.

Eight is “The Song of the White Wolf” by Sonya Belusova. An absolute bop, it really feels like you’re part of the world of “The Witcher” (good series by the way). Giona Ostinelli lends his beautiful tenor voices as the primary vocals, but when Sonya joins in for the third verse, I get chills every time.

Seven is “The Night Window” by Thomas Newman. One often overlooked thing about movies is their soundtracks, and the “Finding Nemo” guy really brings it to the table for “1917.” How do you capture the feeling of running through a decimated townscape as flares light your path, revealing you to the enemy? No clue, but somehow Newman does it, all with this odd sense of wonder and awe.

Six is “Pirouette” by Dizzy. Okay so I really slept on this song, and it’s since become my favorite Dizzy song. This one is also saying goodbye to a friend, but a heartfelt goodbye. Like, they’re leaving, and you know you won’t see them again for a while, or ever. However, even despite that, you know that you’ll meet again. Whether it’s in this life or the next one, you’ll be waiting.

Five is “Your Love (Deja Vu)” by Glass Animals. This song is about abusive relationships. There’s no other way to put it. No matter how hard you try to escape, you keep coming back. The back track is persistent, almost desperate, like it wants to escape this cycle but just can’t get out. Dave sounds just as desperate. I haven’t stopped listening to it since it was released.

Four is “Tokyo Drifting” by Glass Animals. Where do I start? Dave creating this persona to make fun of himself? The absolute fire trap beat? Oh, the brassy bits just before Denzel’s Verse! Or maybe just how hard Denzel went himself. I think it all just comes together to make a song that really stands out in Glass Animals repertoire, a trap song with just the right touch.

Three is “Burying the Dead” by Kevin Kiner. What a fitting name it is. It’s one of the final pieces in “The Clone Wars” animated series, playing after Ahsoka survived Order 66. It acts in the literal sense, as it plays after Ahsoka and Rex finish burying the clones, but also serves to signify the death of the Republic. Kevin Kiner still manages to make it sound like star wars, yet in his own distinct style.

Two is “Run” by Joji. Another song about relationships ending? Completely on par. Joji sings about cheating on one side, but still seeing the failings on the other. But, rather than doing his normal lofi-esque music, he formats it like a rock ballad. He uses a couple verses followed by a sick guitar solo to close off the song, but tosses in some distant-sounding lines at the end.

Number one is “Mary” by Big Thief. What does this song mean to me? Enough to sink 18 hours into it over the course of four months. It fills me with a sense of sadness and nostalgia. There’s this need to it, to go back to your childhood and relive those memories. The good times and bad, to see old friends again. Some are still with you and others aren’t, but you just want to feel that again. It’s one of the first songs to make me feel genuine sadness in a long time, yet somehow, it’s comforting. Rather than just sitting as background noise, it offers to take you on a journey through the past and show you what you feel you’ll never have again.

And that’s all for this year. As usual, send feedback to [email protected] I’ll see you all next time.