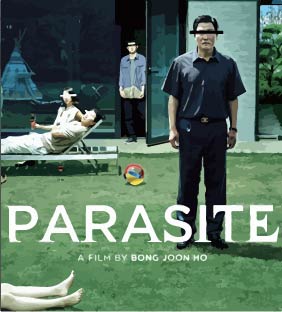 The Host
2020 brought a year of fantastic movies to the Academy of Motion Pictures, including the film “Parasite.” “Parasite” is a foreign film and the first foreign film to win Best Picture. Coming out in 2019, but winning in 2020 because the Academy Awards were in February, it was a hit with the critics, and rightly so.

The Plot
The Kim family is in need of money, so they resort to their son’s friend to get their son a tutoring job, specifically for a rich family. While taking the job, Ki-Woo, the son of the Kims, finds out that the rich Park family also needs a tutor for their son. So, Ki-Woo enlists his sister, Ki-Jung, to teach the son. This then leads to the Kim mother and father taking jobs within the Park family to take advantage of their money. However, the Kim family must keep it a secret that they are all kin. Will the Park family find out, or will the Kims successfully hide their secret?

The Examination
With the film being made in South Korea, English is not the first language, so the entire film is in Korean. There are subtitles, but this does not detract from the film. It was weird at first to read everything they said, but it did make it clear as to what they are saying during the entire movie.
The plot was interesting and, quite frankly, kept me on the edge of my seat for the entire film. I was unsure of where anything was going, as there was no predictable direction as to where it could lead. Everything was up in the air. These are new characters no one has ever heard of. Anything could happen.
The way the film flows is amazing. The actors really grasp the roles and make me believe that they are infiltrating a rich family. Everything feels like it happens for a reason and has consequences.
The sets are very well put together. The Park’s home provides a very grand depiction of a lavish lifestyle whereas the Kims have a very low-life apartment that is dirty and mangled. It really shows the drastic difference between the two families’ lifestyles.

Not only is the film well put together with an amazing and fresh story, but it has also been recognized with a lot of rewards. It earned Best Picture, Best Director and Best International Film at the Academy Awards. There were also many awards given to “Parasite,” many outside of the United States and the Academy.

All in all, this film is amazing. It completely turns around the way movies are thought out. It brings a new and fresh story that has not been seen before and is executed very well.

“Parasite” can be streamed on Hulu