Book Review: “The Rest of Us Just Live Here” 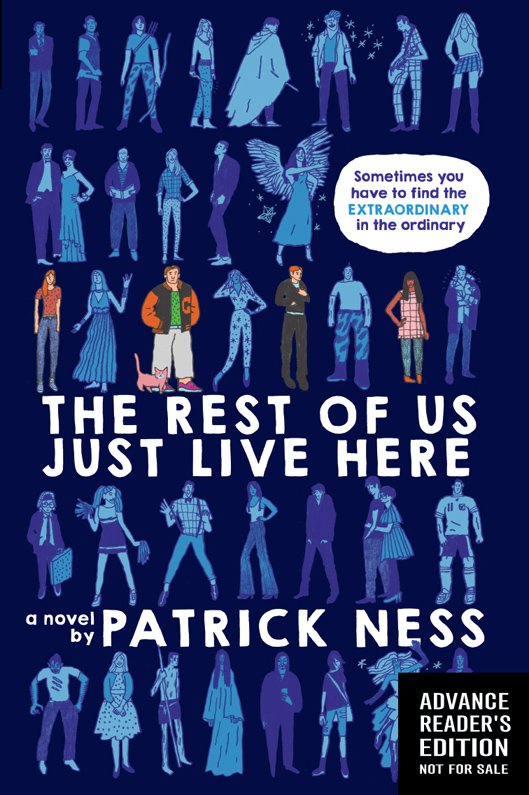 Young Adult, or YA, fantasy books always seem to focus on “the Chosen Ones,” the special individuals who were always meant for greatness. This book, however, aims to answer the question: what about everyone else?
In “The Rest of Us Just Live Here,” by Patrick Ness, the reader follows a group of friends doing their best to finish their senior year of high school. The novel employs a unique narrative style at the beginning of each chapter. The author departs from the story of the main characters to give the reader the whereabouts of the “indie kids.”
The indie kids are the members of the novel’s universe who would typically find themselves at the center of a YA novel. They have special powers and destinies and spend the entirety of the book fighting against demons and other supernatural forces encroaching into the mortal realm. However, these individuals make up the B plot of the story; they are barely given a paragraph each chapter. The narrative’s true focus is a “normal” high school senior named Mike.
Mike battles OCD, which is heightened by his mother’s exhaustive campaign to become a senator, his father’s alcoholism, his sister’s eating disorder, his best friend’s suddenly suspicious behavior and the non-reciprocated love he has for his friend, Henna. Mike feels trapped, and he is doing his best to make the most of life before he and his best friends leave for different colleges and different lives.
I love this book because it is very raw, very personal. There are passages about the nature of love, about dealing with mental health and about accepting others and oneself. Mike struggles with feeling like he is not needed or wanted within his friend group, a struggle I strongly connected with when reading it for the first time as a sophomore in high school. Mike is also afraid of what comes next for him, about how he or the world might change. Again, all this uncertainty is set against a sub-plot of supernatural Immortals breaching into our dimension, with only the indie kids to stop them.
For Mike, it isn’t about the end of the world; it’s about the end of high school. And, for the reader, the book helps them to understand that life isn’t about trying to fix problems that aren’t for you to solve, but that it’s about enjoying what is in front of you while you have it.
While revisiting this novel last November, I laughed, cried and reflected, as I think any truly good novel should make the reader do. I picked it up again for a class and, although I remembered I had enjoyed reading the book, I couldn’t remember the plot. But, after four years between readings, I was driven to pick up the book again because of the feeling that the book had left with me.
This novel is a must-read for fans of “The Perks of Being a Wallflower” and “The Fault in Our Stars” who also like a little bit of magic. I’d also strongly recommend this book to anyone feeling like they aren’t “main character material,” and I hope it impacts you as much as it did me.