A Lie Of The Mind: Play Review 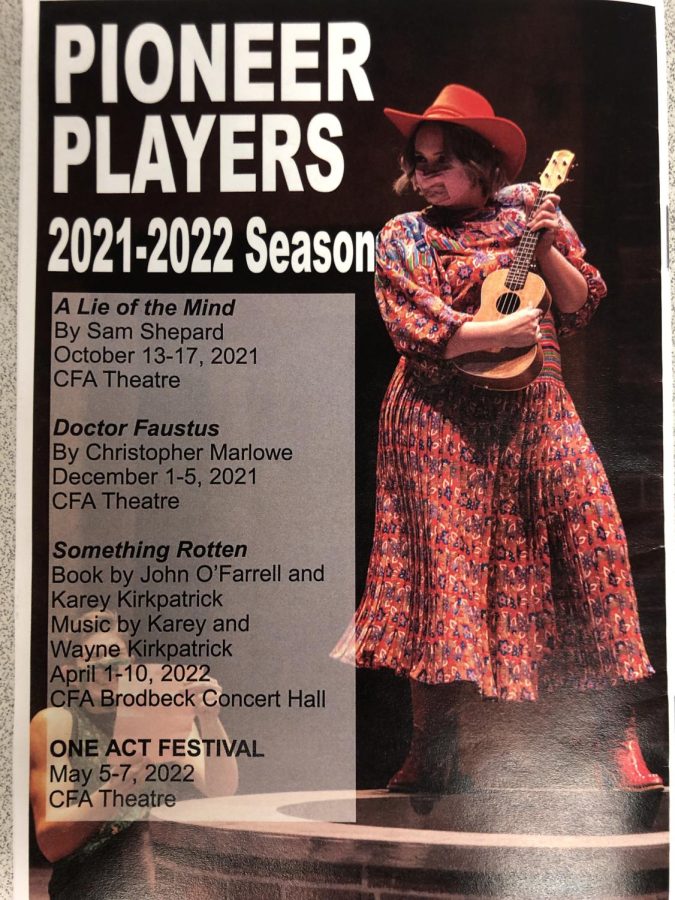 On Oct. 13, the Center for Fine Arts put on the play “A Lie of the Mind” written by Sam Shepard. The play ran from Oct. 13 to Oct. 17, giving students several chances to see the CFA’s work.

Ann Farrelly, the director of the play, wrote an excerpt on the inside of the playbook that read, “Shepard explores the myth of the American family—The lies we tell ourselves, the traditions we cling to, and the cy- cles we perpetuate … Shepard is always asking, “how did we get here?”

Farrelly explains why she chose this play: “It’s important to tell sto- ries like this, and everyone wanted to tell this story. These are the stories that are often not told. Sam Shepard is a favorite of mine, and this is a very popular play from our acting class, we do scenes from it. And they always have wanted to do this play.”

“A Lie of the Mind” is set in California and Montana, bouncing between perspectives of two partners who were in an awful relationship. Beth, played by Isabelle Sander, was beaten by her husband to the point of brain damage. Throughout the play, Beth’s recollection and pattern of speaking is shattered and poorly put together. Jake, played by Jon Hut- son, also struggles from memory recall and becomes physically ill from what he did to Beth and how everything came to be. As the play contin- ues, Jake and Beth’s mental states deteriorate while in search of normal- cy. The parents of both Jake and Beth can be seen helping or neglecting the characters from growing. As Farrelly noted earlier, the playwright’s goal is to illuminate the things that we do for our family, and what is nor- mal to us can be completely upside down from another family.

The Exponent was able to catch some of the cast afterwards and in- terview them on their experiences and thoughts.

“I feel we had a really eventful night! We had a few staff and stu- dents come to the 11 A.M. showing, which was nice!” said Katie Dionne, a Junior Fine Arts Theatre major at UW-Platteville.

Jackson Hemming, a Fine Arts Theater and Computer Science double major, was asked to elaborate on how different plays last year were. “The pandemic show was completely different. We did ‘The Taming of the Shrew.’ There wasn’t a live audience, it was live on Facebook, and it was a challenge. Having an audience gave us more energy this year than do- ing it live last year.”

When asked what the hardest part of the play was, Cameron Tieman said, “How little time we had to do. Every show I’ve done we have had a month or two to read. We hit the ground running and we had a short amount of time to do it, and I think we did great!”

One of the hardest things about the play for Morgaine Schroeder was “memorizing the order of lines and getting into the headspace of the character. Trying to put yourself into that character and but keep your- self separated enough so that it isn’t damaging you as a real person was also a challenge.” Schroeder explained, “I think a lot of it came down

to remembering that there are people around me who care about me and support me. When we all leave, we have that closeness and ability to pull each other out of that spot and say, ‘You’re Morgaine’, this is who you are!’”

The CFA did a wonderful job acting, performing and producing the scenes. On Dec. 1-5, the CFA will be showing “Doctor Faustus” by Christopher Marlowe, and encourage all students and faculty to watch.