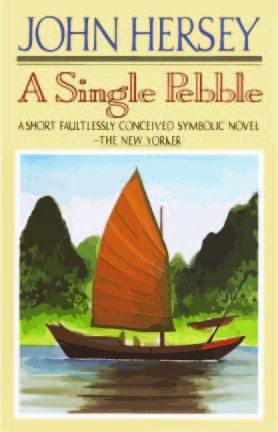 In John Hersey’s 1956 short and sweet fictional story, we follow the journey of an American engineer, who is sent and tasked by his place of work to survey the Yangtze River for a location to build a dam. Though at first excited and ambitious, the young engineer swiftly learns the deep culture and history behind the river – the raging, flooding, hazardous, (though calming) mystical, essential and unrestricted river.
While boarding a river junk, or a large, flat, cargo-bearing ship, the engineer meets four key personalities: the owner, Big Old, a cruel and strict businessman bound by his belief of his bad luck and profit; the owner’s wife, Su-Ling, the perfect antithesis to and half the age of her husband, who also serves as nurse a and cultural guide to the engineer; the head tracker, Old Pebble, a strong and old man who leads the team of trackers up the river and the cook, a man swaying from bitterness to joy with persistent indifference.
The team of forty-odd trackers work mercilessly through the days and nights as their ancestors had done for generations before them. The experience on the river transitions the engineer’s perception of the river from an untamed natural force for mechanical usage to an important and unchanging component of his companions’ heritage.
John Hersey writes a thrilling story, revealing and highlighting differences between the American culture and Chinese culture at the time. The jarring and stark difference inspires introspection, asking the reader to search for his own values and morals as the fictional engineer had searched for his own.
I checked out the book on a Thursday with no expectations. It is a book with an old binding and nothing more than the title and author’s name on the cover. I rolled my dice and took a gamble on it, and boy I was happy. Within two-and-half days of checking it out, I was reading the final lines and closing the book with a sense of satisfaction. Hersey did an amazing job of captivating my attention from start to end with all his characters, plot points and writing style.
A Single Pebble is available in our very own Karmann Library on campus. The copy totals a very consumable 180 pages, and can provide an enthralling weekend read as to escape the grasps of school.