“Over the Garden Wall”: An Autumnal Masterpiece

Delightfully spooky and pleasantly ominous, this miniseries is a perfect addition to your fall movie marathon 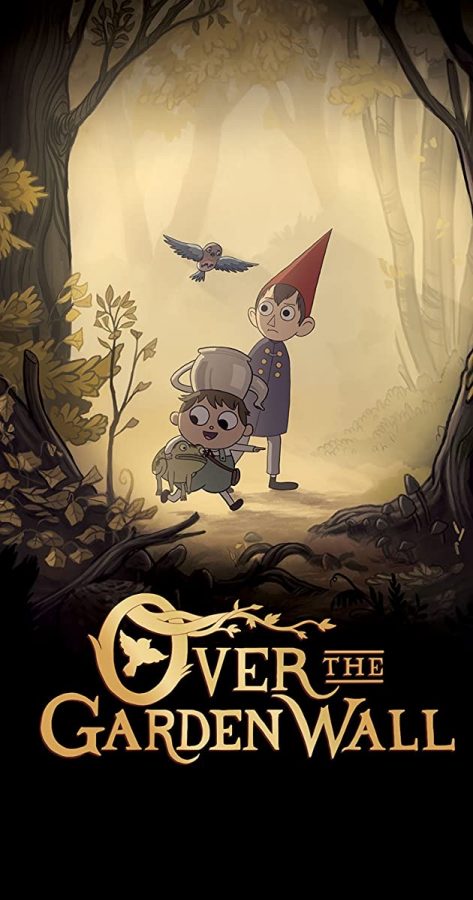 Official promotional poster for "Over The Garden Wall"

“Over The Garden Wall” is a beautifully written and animated fantasy adventure miniseries that aired as the first of its kind on Cartoon Network in 2014. The animation is charming, though there is a deliciously ominous undertone to both the scenery and the score of each episode.
Over the course of its 110 minute run time, brothers Wirt and Greg attempt to find their way out of a dark and twisted, yet somehow not unsettling, jungle forest which comes to be known as “the unknown.” Wirt, sporting a red cone cap and a short navy cape, begins by asking his babbling little brother, Greg, who is wearing a tea kettle upside down on his head and carrying a frog who adopts various names throughout the episodes, “Uh … Greg … where are we?”
The brothers meet numerous characters, ranging from dubious to whimsical, on their journey to find Adelade, who will supposedly help them find their way home. Along the way we meet the Woodsman, who wanders the woods with a lantern, diligently cutting down trees to keep it lit, the Beast, one of the aforementioned more dubious characters, and Beatrice, a talking bluejay who agrees to help the boys escape the unknown.
This show features the voices of Elijah Wood, Melanie Lynskey, Chris Isaak, Christopher Lloyd and John Cleese and an hauntingly autumnal soundtrack. It is hard to put into words the feeling that this show exudes. The best way that I have heard it put is that this show is not a Halloween special, but rather, a personification of Fall itself.
There are ten episodes in all, and there has been much speculation as to what story each episode is meant to tell. Some believe that the entire show is a fantasy retelling of Dante’s “Inferno.” Others believe that each episode is centered around characters who, with the help of the main characters, overcome the seven deadly sins.
The character development of Wirt is probably my favorite thing about the show. I won’t give too much away, but for anyone who has siblings, Wirt and Greg’s relationship is easy to identify with. The emotional payoff of watching them grow together and come to a better understanding of each other is the thing of coming-of-age novels and will leave your heart feeling warm and full.
Whatever your take on the show may be, it is definitely not devoid of thought-provoking storylines, and will stick in your mind long after you’ve finished it.
If none of this has convinced you to check this incredible miniseries out, maybe this will: the beginning and ending shots feature a very handsome frog playing piano and singing the theme song for the series in a rich timbre. Also, the Highway Man … you just have to watch the show to see the Highway Man: you will not regret it.
I urge you, make some hot chocolate, find your comfiest blanket, lower the lights and enjoy this trip into the unknown.
“Over The Garden Wall” can be streamed on Hulu.