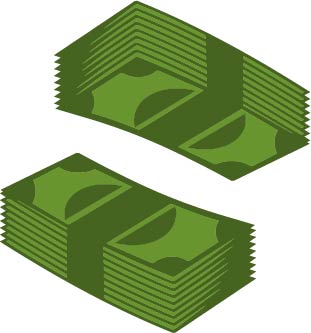 As part of the $1.9 trillion stimulus proposal put forth last month following President Biden’s inauguration, progressive Democrats intend to gradually increase the federal minimum wage to $15 per hour by 2025. The proposal would also index the minimum wage with median wage growth, according to CNN, as a means of ensuring minimum wage rises with inflation in the future, as well as begin addressing the lower wages for waitstaff to grant them the minimum wage. At the same time, Sen. Bernie Sanders, I-Vt., a long time endorser of wage increases, is set to take control of the Senate Budget Committee, where he intends to finally secure support for the policy.
Currently, the federal minimum wage sits at $7.25, which it was raised to in 2009 in the midst of the 2008 recession. A full-time employee working the standard 40-hour workweek at minimum wage in a single job makes roughly $14,000-$15,000 each year, varying based on holidays, vacation and time off for illness or emergencies. According to the Department of Human and Health Services, an individual is considered impoverished if they have an income of less than $12,760 annually. The margin between annual income with the current minimum wage, while above poverty, is narrow, which means with a single major surprise expense is likely to put minimum-wage workers in financial jeopardy. These numbers, of course, vary locally depending on cost of living and state minimum wages.
The issue of raising the federal minimum wage has been a controversial topic across the nation for several years, with many advocating that it needs to rise to meet the current costs of living. Previous motions to pass a wage increase have consistently been met with strong opposition from Republicans in the Senate, who claim that such an increase would harm small businesses and result in the loss of jobs. According to the Washington Post and statements from several senators, Democrats agree that the wage should be increased, though they disagree on how much and how quickly; Republicans in opposition to increases in wages believe that, at the very least, this motion should not be part of a relief bill for the pandemic. Senators Mitt Romney, R-Utah, and Tom Cotton, R-Ark., intend to submit one such separate bill soon. This proposal focuses on increasing the minimum wage automatically with inflation and “ensuring businesses cannot hire illegal immigrants,” according to NBC.
Progressive Democrats are currently attempting to pass the wage increase as part of the relief plan through budget reconciliation, rather than normal procedures, “to avoid the 60-vote threshold needed to overcome a filibuster and approve legislation,” according to the New York Times. This would allow Democrats to force the package through with their 50 votes and Vice President Harris’s tie-breaker vote. However, Democrat support for the bill is also split. One such internal opponent is Senator Joe Manchin, D-W.V., who would like to see the minimum wage raised gradually to $11, with willingness to agree to $12.
“Only 38 [Senate Democrats] have so far co-sponsored legislation to increase the minimum wage to $15 an hour,” reported the Washington Post’s article on the current legislation.
Additionally, in a CNN Town Hall on Feb. 16, president Biden said, “I do support a $15 minimum wage, but that’s a debatable issue.” The President went on to say that he would accept a compromise as low at $12 or $13 on the current legislation.
At this point, it seems unlikely that the motion to increase the federal minimum wage will pass alongside COVID-19 relief, and it will have to be proposed separately once again. Despite the resistance in Congress, minimum wage increases at state and county levels have consistently been supported by voters, with the most recent instance in Florida, where the people supported a minimum wage increase to $15. This local wage increase currently aims to have wages raised from $8.65 to $10.00 by September of 2021. While the battle in Congress may carry on for some time, states continue to move toward higher wages locally.