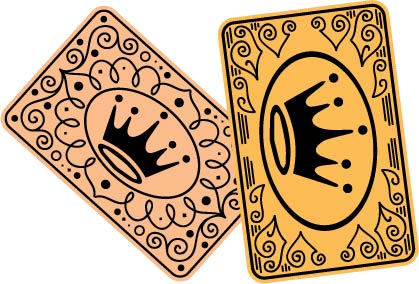 Aries: March 21 – April 19
Justice – This card is super easy to read. The Justice card declares that you will receive and seek righteousness in this world. Join law school. Buy some nifty professional clothes. Slam your hand on the table and scream, “Your Honor!” whenever you’re in court. Put them baddies in their place. Issue court orders, or whatever a lawyer does, I don’t know. Break the corruption around us, my dear child. I’ll be sitting, waiting.
Taurus: April 20 –May 20
Three of Pentacles – A little known fact, I have over 14 different variations of the Three of Pentacles in my deck and I don’t even know what it means! Good luck, champ, you’ll find some positive meaning in this somehow!
Gemini: May 21 – June 20
Culver’s Free Scoop Coupon – Oh, shoot! I knew I left this bad boy somewhere. The flavor of the day was Turtle Sundae the other day and I was looking for this. I’ll be taking this back now, thank you for your help.
Cancer: June 21 – July 22
Five of Cups – After Googling this card, apparently it is a bad omen. Now, I do not like or tolerate bad vibes in my office at all. The card reeks of past hurt and heartbreak, and that does not cut it here. Talk to an Aries for some justice and keep your head up, kid. You’ll get through the poopoo doodoo of life with some positivity … I think.
Leo: July 23 – August 22
King of Swords – Ah, yes, the King of Swords. Reminds me of my high school days. I was the star of the track team, did you know that? I could read the 400 meter dash faster than you could recite the alphabet. Back in my day, we didn’t have fancy spikes or fancy tracks, we just ran on dirt paths. It was a different life back then. Y’know, that makes me think of another story of the time I sprained my ankle —
Virginia: August 23 – September 22
Wikipedia Article – Virginia, officially the Commonwealth of Virginia, is a state in the Mid-Atlantic and Southeastern regions of the United States, between the Atlantic Coast and the Appalachian Mountains.
Libra: September 23 – October 22
Card charged failed. Gateway Error message: (E00027) Bill To Zip/Postal Code is required.
Scorpio: October 23 – November 21
Ace of Pentacles – Aces are good. This card is good. Get ready for goodness because this card means good things. Very, very good things. Super good. ULTRA good. Buckle up, good things incoming at high velocities. Don’t ask questions.
Sagittarius: November 22 – December 21
Business Card – Here’s my business card. I have many goods and services for which money can be exchanged. I’m a doer, a thinker, a creator and influencer the likes of which you’ve never seen. My talent surprises that of the ordinary laborer to such an elusive extent that I don’t even know how good I am.
Capricorn: December 22 – January 19
Justice – Oh, look at you, getting the same card that Aries did. They’ll be seeing you in court over this. Good luck … I hear that Aries has some nifty professional clothes.
Aquarius: January 20 – February 18
Queen of United Kingdom – Where do I even begin on this card? She’s the longest reigning British monarch, longest reigning queen and longest reigning female leader in history. She also holds the title of longest reigning current monarch. She’s like, what, 94 or so? Some people think Betty White will outlive the Queen, but what they don’t take into account is the fact that she is THE Queen of the United Kingdom and the 15 Commonwealth realms.
Pisces: February 19 – March 20
Two of Swords – I hear that this means balanced forces. So, let’s take this to the math board to figure out what it means. If Force 1 and Force 2 are applied to you in precisely opposite directs with exact magnitudes, you will not accelerate. So, you’re either moving at a constant velocity or not moving at all. So, which are you, stagnant or active, kid?
Tarot Deck: Wait, I’m using a tarot deck?