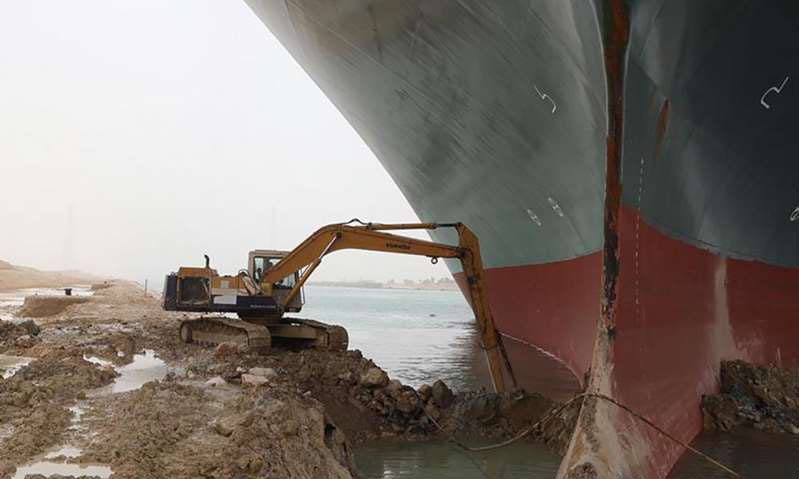 Breaking: Global economy so fragile that one giant ship stuck in a canal could have serious consequences for workers on the other side of the globe.
Basically, a really, really big boat – I’m talking absurdly huge – got stuck sideways in a canal.
“Y’all are acting like steering a boat that’s bigger than your average whale is easy. I’d like to see you give it a try,” said Captain Jerry, who would like to emphasize that aiming the blame at him and making fun of him for getting a literal mammoth of a ship stuck in a tiny-by-comparison canal will not solve any of the potential problems.
A big boat blocking a canal means that no other boats can go through said canal. Comical while simultaneously existential-dread-inducing photos of tiny rigs trying to push the mammoth vessel from where it became embedded in the banks of the canal have been surfacing all over the internet. Memes have been made, although it’s hard to ignore the metaphor: tiny, ineffective “solutions” gently prodding a gargantuan problem.
“This issue could cause a domino effect, perhaps even impacting economies across the world,” said Captain Obvious.
Of course, many people found this whole ordeal to be pretty hilarious until they found out it could affect them poorly (isn’t that just the way)?
For real, though, if that ship is carrying materials necessary for manufacturing, those materials could be delayed from arriving at the factories that need them to maintain production. This big boat could get people laid off from work during an already financially-difficult time.
When asked if he thought CEOs of manufacturing plants would cut their workers a break and support them during this potential difficult time with the abhorrent amount of access wealth accumulated from decades of wage theft, Mr. Benny B. Enzos had this to say:
“Dude, are you kidding? No way; I – I mean, CEOs – have a lot of assets to worry about … yachts don’t just buy themselves.”
The big ole boat may have finally been dislodged from its diagonal sticking place, but we’re not in clear waters just yet; over the next few months we’ll see just how much of a jam this situation has put us in.