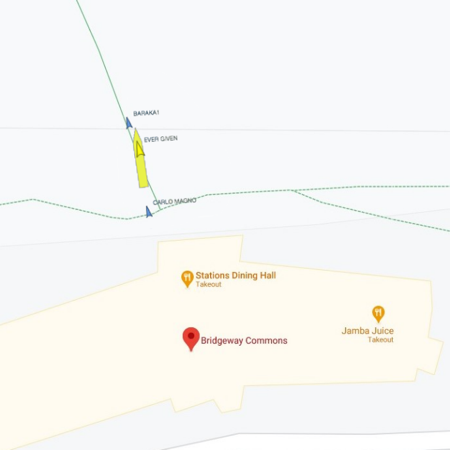 In an unfortunate turn of events, what could have been the end of a disaster on a global scale has now turned into yet another, and this time it’s personal. Ever Given, the cargo ship responsible for the blockage of the Suez Canal last week, was freed from the shores of the canal on March 29. While the ship was able to leave the canal without issue, it seems to have continued on to yet another point of blockage – the bridge that connects the trail between Bridgeway Commons and Greenwood Avenue Market.
As students gathered to assess the situation, Chancellor Dennis J. Shields explained to the bewildered crowd, “Very few know this, but we import every single item on the Stations Dining Hall menu direct from the manufacturer in Shenzhen. Through what amounted to a clerical error, the ship has brought itself here in an attempt to deliver the goods onboard directly, despite the university being completely landlocked.”
Inevitably, it found itself lodged on the iconic Bridgeway Commons bridge, where the university’s engineering students have taken to pointing and laughing at the crew onboard for ignoring fundamental laws of physics.
While they attempt to free the ship from its place atop the bridge, officials from the university have urged students and staff to take the thin hiking trails that cut beneath the bridge for the time being. Unfortunately, a reported two sprained ankles and a mild case of dehydration have only added to the toll of casualties.