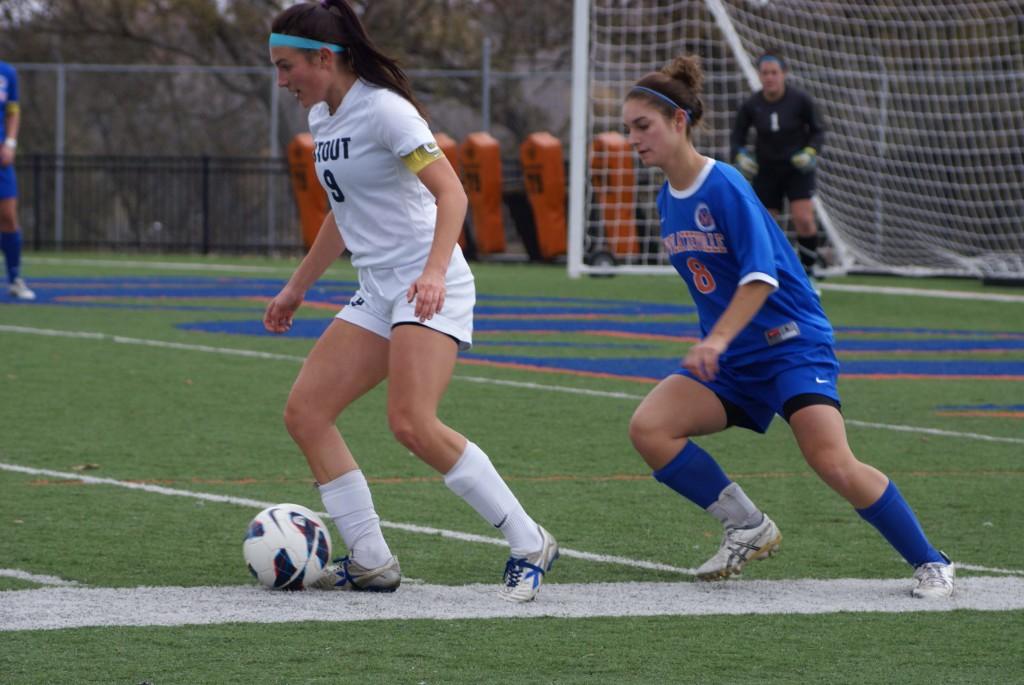 After the Pioneers’ bus was an hour and a half late, the match was pushed back 30 minutes, throwing off the usual routines for both teams.

“We came out too slow and Eau Claire capitalized on that,” junior defender Lindsey Harms said. “After they scored, we just couldn’t seem to get back to playing our game the way we normally do.”

Blugolds’ player Paige LeGate scored her first goal of the season in the first two minutes of the game.

UW-Eau Claire scored their second goal of the game just before halftime.

UW-Eau Claire’s Caroline Henderson scored her second goal of the game in the 75th minute to take a commanding 3-0 lead.

“It wasn’t the best we ever played. We just couldn’t click like we had been doing last week,” senior captain Cassie Blatz said. “We had been looking forward to this game since we played Eau Claire the first time, so it’s disappointing to walk away from that game with a loss and have to end eight seniors’ careers on that note.”

“The seniors meant the world to this team and we are losing a lot of leadership, but I couldn’t be more proud of them,” Stringer said.

“I’m really going to miss all of our seniors,” Harms said. “Each one had a special place on this team and it’s going to be really hard to replace them all. Their personalities are one of a kind and definitely made our team who we were.”

Blatz had a special role on the team and her leadership will be difficult to replicate.

“Being the oldest on the team and a captain, the team knows me as ‘Team Grandma,’” Blatz said. “This team has become my family and I couldn’t have asked for a more amazing group of women to end my collegiate career with.”

The Pioneers ended their season with a 9-9-1 record overall and a 4-3-1 record in the WIAC.