Seniors Jake Manning and Jim Stocki remain focused on finishing the 14-15 season strong, but the two are both on the brink of Pioneer history as they approach 1,000 points accumulated over their four year tenure. 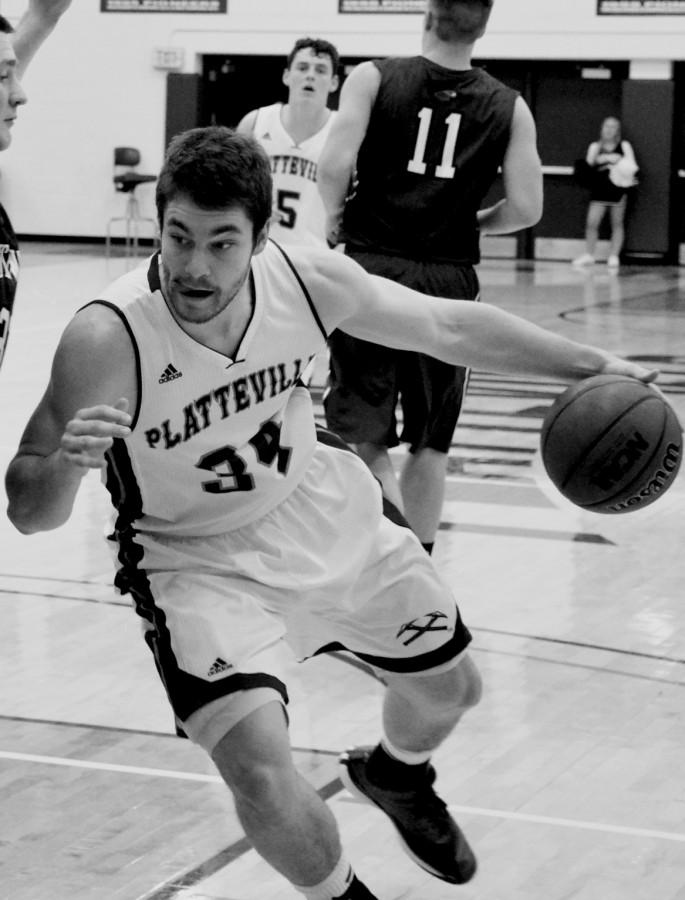 Senior forward Jake Manning drives against a UW-Whitewater opponent on Jan. 28. At time of publication Manning was 18 points from the 1,000 point career mark.

Not one, but two Pioneer basketball players are approaching an elite status.
University of Wisconsin-Platteville seniors, Jake Manning and Jim Stocki are approaching the 1,000-point career mark.
The Pioneers faced University of Wisconsin-Eau Claire last night. Before the start of the game, Manning remained 18 points away from his mark and Stocki, eight.
Manning was recently named Wisconsin Intercollegiate Athletic Conference’s player of the Week for the week of Jan. 27.
At the time of this publication Stocki held 992 career points and Manning held 1,066.
Head Coach Jeff Gard appreciates the men’s commitment to the team and sees their accomplishments as a reflection of the system implemented by UW-Platteville.
“I think it’s been an indication of their commitment to the program.  I think if you look at the 1,000 points score, both those guys did a good job playing within the system and finding opportunity to score within it,” Gard said.
When the two pass the 1,000-point mark, they will become the 34th and 35th players in Pioneers history to achieve such a feat.
Even though the 1,000-point mark is a huge achievement for both Manning and Stocki, they are not ready to celebrate just yet.
“It’s a reflection on the time I’ve spent here. Right now it really doesn’t mean much, it’s something after the season that I’ll probably look back on,” Stocki said. “It’s something to be proud of but more than that I’ll just remember the time I had with my teammates and all the games I’ve been able to play.”
Both men are focused on finishing the conference strong and making it to the playoffs.
“I measure winning games. I’ve been fortunate in my career to be in a position where my teammates needed me to win. Everybody has their own role. I’ve been fortunate to get those open shots,” Manning said. “So far as an achievement, I didn’t know if I had it. It’s not something that is on my radar, I’m always just thinking about the next game or practice.”
This time of year the team is focused on improving their play in preparation for their post-season endeavors.
The Pioneer basketball team has never made it to the play-offs so getting wins is the top priority of both men and the team.
“Well obviously you hope it impacts with the wins. That’s the main thing, both those guys are going to say that even with the 1,000 points that they have, they prefer to have more wins.” Gard said.
Gard goes on to correctly predict that both men would rather obtain more wins as a team than personal achievements.
“Right now is making sure we finish out the season strong and win the conference tournament.” Stocki said.
Manning held similar emotions.
“Definitely win out. Finish conference season strong. I would like to play in the NCAA tournament,” Manning said. “Never made it, we’ve always been right at the door of making it so I want to finally break through the door.”
Both Stocki and Manning attribute their success to their teammates and coaches.
“Our managers, I like to thank the managers. My parents helping me out financially, being able to play sports,” Manning said.
So what’s next after both these men finish the basketball season?
Stocki wants to finish his degree in May and obtain a supply chain job.
Manning, on the other hand, still has a year of school left but is trying to get into a position assistant program.