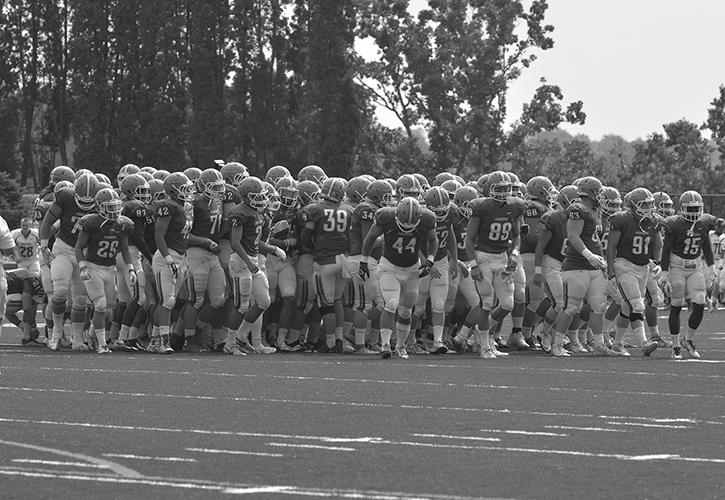 A dominant 42-6 first half performance by the University of Wisconsin-Platteville Pioneer football team solidified the offensive power that the Pioneers are known for and validated a defense led by a first year coordinator.

Schmidt said that the Beavers were set up in the first two drives by two big plays, one they made and one that was given to them by the Pioneers.

The Beavers drove 78 yards in the first quarter, which was capped off by a 3-yard run. Following the second Pioneer score, 14-6, the Beavers drove 41 yards before senior defensive tackle, Andrew Robinson, hit the quarterback as he threw the ball up. The Pioneers’ senior safety Logan Emendorfer caught the miss-thrown toss for the first turnover, which created a turning point in the Pioneer defensive game.

“When things start going bad, good teams and good players make big plays to get you out of it,” said Schmidt.

Junior quarterback, Tom Kelly, brother of former All-American quarterback John Kelly, was nearly perfect in his collegiate varsity debut as he threw 21 for 25 with 277 passing yards and five touchdowns, along with three rushes for 22 yards.

“Tommy played real well,” Munz said. “Anytime you have a sibling that plays you try to compare him against the other guy, but Tom was able to start his own chapter.

The perimeter attack was led by a plethora of returning talent in both the slot and wide receiver positions.

Senior, Russell Martin, led the receivers with five receptions for 83 yards, while junior, Mitch Munda, caught four balls for 62 yards, along with a touchdown.

Aside from Martin and Munda there were seven other receivers who registered for yardage.

“It’s hard to call any of them backups because on any other team in division III they would be starters,” Munz said.

Junior running back, Justin Johnson, received the start and tallied 38 yards on ten attempts, along with a touchdown. Senior back, Ryan Fish, rotated in for eight carries, tacking on 69 yards, while junior Kyle Whitman was the third man in rotation getting six carries for 20 yards.

On the defensive side of the ball, Schmidt said that even in the third and fourth quarters he was testing the depth of his roster by continuing to mix up play call and treat it like a tight, high-intensity game.

“I wanted to create a stressful environment even at the end of the game,” Schmidt said. “I was trying to put them in difficult situations.”

“All three of them performed very well and are all going to play extended reps for us,” Munz said. “JJ (Johnson) worked his butt off in camp and Whitman was a little injured but is full go now. Eventually we have to hone in on who is going to be our guy.”

The Pioneers travel to Dubuque University on Saturday to take on Schmidt’s former team the Spartans.

Schmidt said that he anticipates a high-intensity performance from the Spartans, as well as a team desperate for a win, following an open season loss.

“Their head coach is a mastermind and an elite play caller and they have a tremendous coaching staff as well as some incredible athletes,” Schmidt said. “The thing about us is every week we’re going to do what we do, just keep doing it better.”