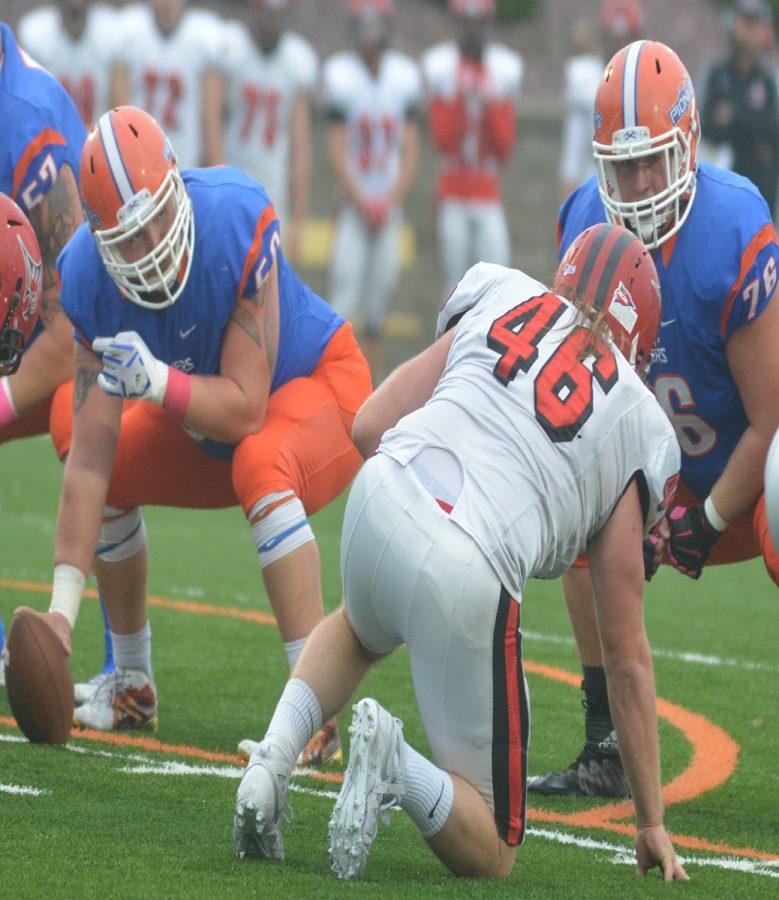 UW-Platteville Pioneer football players junior Ryan Gaul and freshman Nick Broadhurst set up on the offensive line during the homecoming game against the UW-River Falls Falcons.

There were 3280 fans in attendance for the Pioneers homecoming game. They brought the noise early and often until the first quarter stopped unexpectedly. With gloomy conditions, the game was suspended for half an hour due to lightning. There was plenty of conversing and drinking during the wait. However, it appeared that only half of the fans came back to watch the rest of the game.

The first half didn’t go quite as expected for River Falls, who received the ball to start the game. The first play of the drive resulted in a fumble recovered by the Pioneers at the River Falls 25-yard line. It wouldn’t take long before a Tom Kelly and Dan Arnold connection that resulted in a 22-yard touchdown giving the Pioneers a 7-0 lead within the first minute.

The Falcons couldn’t answer and were forced to punt the ball away to the Pioneers. This punt would eventually lead to another touchdown pass, this time to Dillon Villhauer, giving Platteville a 14-0 lead.

The Pioneers looked to be in control at the end of the first quarter but would start the second quarter facing a third and long at the River Falls 26-yard line. Kelly’s pass was incomplete to Arnold bringing up a fourth and ten. The Pioneers would then decide to go for it, instead of trying to take a long field goal. However, they were unsuccessful and ended up giving the ball to River Falls instead of taking a possible three points.

River Falls would then drive down the field led by a Sawyer Moon 40-yard dime. The drive would eventually lead to score after a one-yard run on fourth and goal. The Falcons couldn’t handle the snap on the point after trying to cut the lead to eight 14-6. Both teams would struggle to find the end zone with the Pioneers failing to convert on another long fourth down until a four-yard run by Sean Studer made for another Pioneer touchdown, extending their lead to 21-6.

The second half was all Pioneers as they marched down the field on the opening drive to score on a second Kelly-Arnold connection keeping, the Pioneers ahead 28-6. River Falls kept fighting and scored their second touchdown on a 24-yard Moon rush. The Falcons would then complete their two-point conversion to pull within 14 but the Pioneers were still up, 28-14.