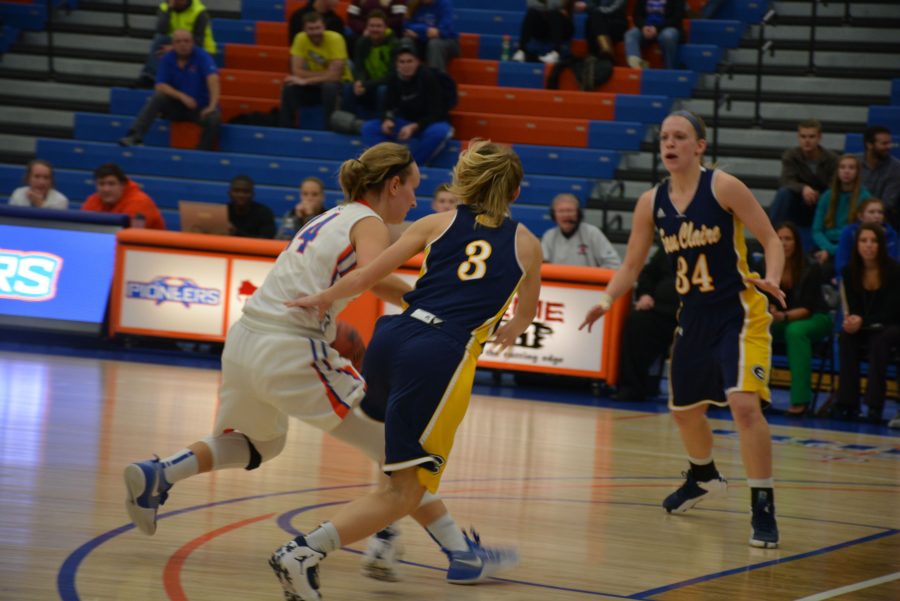 Senior industrial engineering and business administration major Morgan Hartman takes on the Eau Claire defense on her home court during the Jan. 25 game.

On Jan. 25, the University of Wisconsin-Platteville women’s basketball team fell 60-70 at home against division rival UW-Eau Claire. Sophomore guard Morgan Horstman led the team with 12 of the 40 points scored by the starters. The Pioneers out played the Blugolds in many important categories like bench points and points in the paint. Though it wasn’t enough to defeat an Eau Claire team that shot 47.8 percent from three-point land.

The Pioneers would catch fire in the second quarter scoring an astonishing 24 points, which tied the game at 36-36 heading into halftime thanks to Blaire Lutes’s steal and layup with only 10 seconds left. The Pioneers defense held the Blugolds to only two three-pointers.

The third quarter was not friendly to the Pioneers as they were ice cold from three-point range going 0-4. Luckily for Platteville, Eau Claire wasn’t much better going 1-4 at the three point line. The Pioneers would stay tied or within two points throughout most of the half before suffering from an Eau Claire 7-0 run late in the third quarter. However, the Pioneers stayed close only being down by six points with a score of 53-47 at the end of the third.

The Pioneers were hoping for another comeback to start the fourth quarter, but the Blugolds made an early free throw to start the quarter. The Pioneers responded with a layup by Allison Prestegaard, who was fouled, forcing a free throw try which she made. Lifting Platteville to a three-point deficit. Eau Claire would go on a 6-0 run right after the Pioneers’ three-point play, stretching their lead to ten. The Pioneers would march onward and cut the deficit to just four with under four minutes remaining. However, the last three minutes were controlled by Eau Claire as they defeated the Pioneers 70-60.