Pioneer wrestlers prepare for the NCAA regional tournament to take place on Feb. 25 in Minnesota 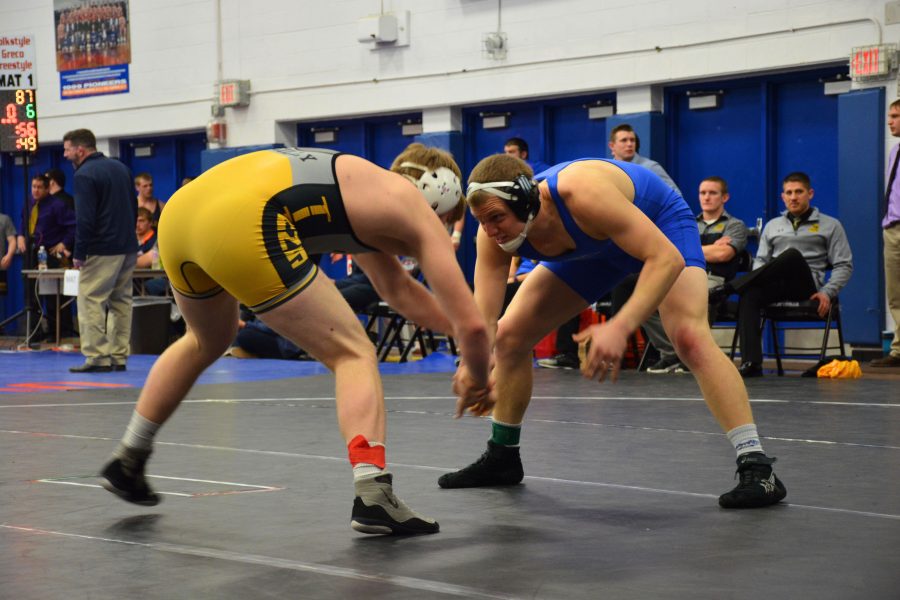 Junior mechanical engineering student Cody Meyer wrestled in the 197-pound weight class during the WIAC Conference Championships. Meyer started the day with a second round loss before winning four straight matches to place third in the conference at 197 pounds.

The University of Wisconsin-Platteville wrestlers placed third as a team at the Wisconsin Intercollegiate Athletic Conference Championship as they continue to improve as the season nears a close. Even though the Pioneers forfeited the 125-pound weight class, they had a wrestler place sixth or higher in eight out of the 10 weight classes. The wrestlers were off to a good start on Feb. 10 at Williams Fieldhouse. Each of the six conference teams were allowed two wrestlers per weight class to make for a much bigger event. After the 125-pound forfeit, Scott Arneson at 133 started his day with a technical fall over Cody Vogel of UW-Eau Claire before falling in the second round. Arneson would go on to win three straight before losing a rematch to UW-Lacrosse’s Reid Johnson 11-7 in the third place bout. Alex Costello at 141 would reach the semifinals before losing three straight to receive sixth place. Carter Barkema at 149 pinned Alex Heiden of UW-Steven’s Point in the first round before falling in the second. Barkema went 3-1 the rest of the afternoon to receive fifth. At 157, Dustin Reynolds and Nicholas Retzlaff were not able to get anything going during the event. Issac Brosinski would wrestle his way into the semifinals before losing a close match by two points to Toby Mosley from UW-Eau Claire. Brosinski, however, was able to win his next match before losing in the third-place match to receive fourth. Cody Meyer was in for a long day at 197. After having a first-round bye, Meyer lost in the second round. After that loss, Meyer won four straight matches to take third place. At heavyweight, D’Andre Johnson seemed to be set for a good day until getting hurt in his semifinal bout. Johnson would not wrestle the rest of the day, but he received sixth. At 174 and 184, Jon Goetz and Grant Wedepohl battled their way into the finals. Goetz (22-5) won three straight decisions 6-0, 5-4 and 10-5, and Wedepohl (26-7) received a bye, earned a major decision of 9-0 and a decision of 7-3 to reach the final round. Richard Carlson of UW-La Crosse would win 174 over Goetz with an 8-1 decision and Jordan Newman of UW-Whitewater would win 184 over Wedepohl with a 10-2 major decision. After competing this past weekend, the Pioneers will have two weeks to prepare and recover before their NCAA regional at Moorhead, MN on Feb. 25. This competition could be the last of the season for some of the Pioneers. In order to qualify for the NCAA Division 3 National Championships at the La Crosse Center on March 10-11, the wrestler must place. The Pioneers had five wrestlers earn a trip to the National Championship last year, including Goetz, Wedepohl and Johnson. Fans can hope to set the bar higher after a successful showing at the WIAC Conference Championships.