After losing two of their last three conference games, the Pioneers drop to fourth place in the WIAC 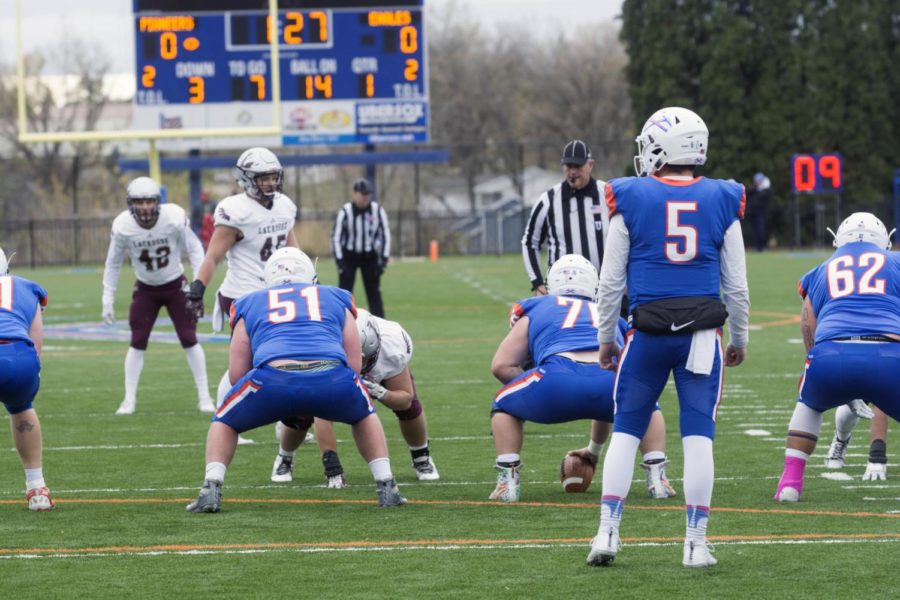 The Pioneers drove downfield in the first quarter of the game against the Eagles.

The University of Wisconsin-Platteville football team lost a close matchup with UW-La Crosse on Saturday, Oct. 28. The Pioneers trailed throughout most of the game but managed to close the gap to only a touchdown, 27-20, before time expired.

The offense for the Pioneers was successful moving the ball in the first half but the team struggled to finish drives with points. The Pioneers kicked off to start the game and forced an Eagle punt early in their first drive. The offense then proceeded to gain yards, which was led by a 47-yard run by Sean Studer, until a miscue occurred on a read option inside the red zone. The fumble was quickly scooped up by an Eagles defensive player, Noah Risch at the five yard line.

“I felt confident in our ability to move the ball. We showed that we could move the ball on them. We just hurt ourselves with the turnovers,” freshman business administration major and quarterback Cade Earl said.

The fumble was the first of four turnovers that the Pioneers gave up to the Eagles throughout the game. The Pioneers had two passes intercepted and two fumbles lost, with three of those turnovers coming in the first half. The most costly turnover was a Jack Eddy interception late in the first half that was nearly returned all the way for a touchdown. This interception led to a short touchdown and made for an 11-point halftime deficit instead of 4. That would be Eddy’s last pass of the day, as Pioneer fans saw Cade Earl throw for the remainder of the afternoon. In terms of going forward, players know that turnovers aren’t going to be acceptable if they want to win their last two games.

“As a team, we look to improve by being smart with ball and not trying to force tight throws and be more aware about ball security,” Earl said.

The Pioneers drop to 6-2 after the loss, and the Eagles rise to 6-2. After a strong first five games, the Pioneers are now ranked fourth in the WIAC behind undefeated UW-Oshkosh, UW-Whitewater and UW-La Crosse. The team has a chance to rise back up in the standings by winning a road matchup with UW-Whitewater this Saturday, Nov. 4. While thinking about the rest of the season, the team seems to be focused on the next game.