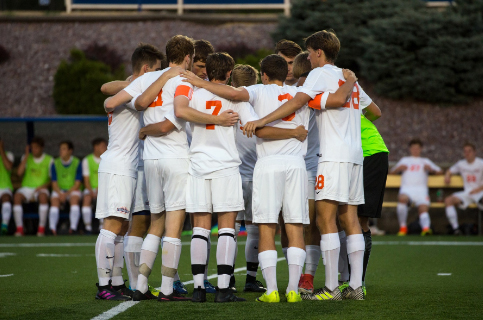 The men’s soccer team comes together for a group huddle during the NCAA Division III tournament.

The University of Wisconsin-Platteville’s men’s soccer team qualified for the NCAA Division III National Championships because of their successful season. The team had a regular season record of 11-3-2, and last weekend, the Pioneers played in the national tournament for the first time since 2012. The team found out about their opportunity from the selection show that was broadcasted at 12:30 p.m. on Nov. 6.

“Most of us watched it as a team this past Monday when they released the selection show that picked the first-round games for the bracket. Although that was when we officially qualified, we were pretty confident we were going to the tournament after beating UW-Whitewater because they were our top competition also vying for the pool B bid,” senior electrical engineering major Jonathan Stopple said.

The Pioneers opened the weekend last Saturday against Westminster College from Fulton, Missouri in the first round. The team competed at the Holmgren Athletic Complex in Chicago, Illinois, and the match began at 5 p.m. The Pioneers were dominant with their performance, scoring five goals on the Westminster defense. The final score was 5-0 Pioneers.

“I felt that we came out very strongly in the first game and showed that we belonged in the tournament,” senior mechanical engineering major Lucas Aplin said.

“Our second game’s result didn’t justify our team and how we play. As we were coming off a game the previous day and we were missing some players, legs were tired as the game went on. I think our team overall played well in Chicago, as we didn’t go further, I still couldn’t be prouder of the guys,” junior civil engineering major Logan Rinderknecht said.

After beginning the season with training on August 18, the team grew throughout the season. The Pioneers were ranked second in the north region, which is the highest position the Pioneers have achieved in men’s soccer history.

The NCAA Division III men’s soccer layout is compiled of eight separate regions. The north region consists of all of the soccer teams from the states of Wisconsin, Iowa and Minnesota that are categorized as NCAA Division III schools. By being ranked second in the north, this helped the Pioneers with national recognition to make the tournament when the end of the year comes. The only team that is ranked above them is top-ranked in the region, fourth in the nation, the University of St. Thomas.

“When I found out we [had] qualified I felt very relieved and grateful for the opportunity. I was not surprised, because we felt that we had done everything we needed to do during the regular season to earn our bid,” Aplin said.

The WIAC doesn’t have enough men’s soccer teams to make a conference, making the Pioneers a Division III soccer independent and needing all of the recognition possible to increase their chances for a tournament bid. In order for the WIAC to put a men’s soccer conference together, they would need a minimum of seven schools to participate.

“The WIAC never had enough men’s teams for a conference. As of now, only UW-Whitewater and us have a men’s soccer team,” head coach Vincenzo Fuschino said.

The Pioneers are excited about the opportunity to be making a lasting impression and to help attract more players to the program. In order to continue being successful, the team will need to continue working hard to make it back into the tournament next year. Even though the season didn’t end as they imagined, members of the team feel that they accomplished a number of their goals this season.

“One of our main goals of this year was obviously making the tournament and from there, getting as far as we could,” Rinderknecht said. “In order to go to the tournament, we had different sub goals which helped us with doing so. Winning all of our home games was another goal. Losing only two games at home was still quite an accomplishment. Shutouts played another big part in our season’s goals. In every game, defensively, we were looking to get a shutout every game. If we were up by 1 or up by 4, a shutout was a goal we had every game. Ending the season with six shutouts is good, but will be another goal we strive to beat next year. Goals were accomplished throughout the season, but while this season is concluded, our team is looking to get stronger and strive for an even better season next year by surpassing this year’s accomplishments.”

With the season now complete, the men’s soccer team will begin practicing again in early April for the one game they will play as a unit to prepare for the next season.

“I am not returning but I expect the guys to keep putting in the effort to improve each day for 8 months until next season starts,” Stopple said. “They’ll be playing soccer, lifting weights, conditioning, and working on their skills to be better players next season. I know they’ll use this season as motivation to not just get back to the tournament but aim to advance farther than we did this year. I know they have the players with the determination to do so.”