The Pioneers used offensive and defensive strategy in order to win against the IIT Scarlett Hawks, and these strategies helped the Pioneers score on 57 percent of their shots 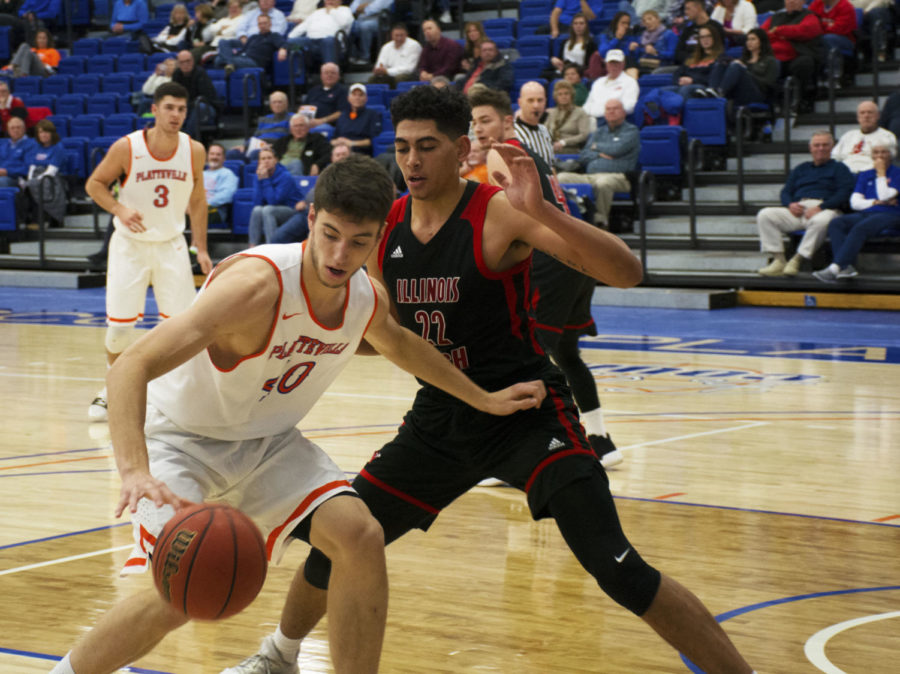 Junior electrical engineering major Clay Gerds is attacking the rim on the offense. He scored 16 points during the game.

The University of Wisconsin-Platteville men’s basketball team had their sixth win of the season over the Illinois Institute of Technology by a score of 89-54. The game was hosted in the Williams Fieldhouse on Nov. 21. The game started off with the Pioneers getting ahead of the Scarlett Hawks. The Pioneers had an 18-point lead within fifteen minutes of the game, and by the end of the first half, the score was 45-32. The top scorers were UW-Platteville senior guard Matt Oestreich and junior forward Clay Gerds with a combined total of 24 points.

“The most effective thing that happened was us getting the ball and playing inside out,” Oestreich said. “[This meaning], we were getting post-ups and kick-outs. We had a really effective game inside and I feel like that was our most dominant force in this game.”

The Pioneers also scored 38 points in the paint while Illinois Tech only received 14 points.

“We knew that they were a transition power team. They like to get out and run. We knew that and we had to get back in transition, not buddy run as coach says and cover the rim and the ball first and go from there,” senior guard Trey Sigel said. “Our half-court defense was even better, I felt like we only gave up what was in the 50’s which is our goal, not to give our 65 points or more. We did that so that was a key, and defense fueled our offense.”

Coming into the second half, the Pioneers used turnovers to their advantage. These turnovers allowed the Pioneers to score more points against the Scarlett Hawks. The Pioneers had 25 assists versus the Hawks seven. Overall, the Pioneers had eight turnovers where they scored 26 points. By the end of the game, UW-Platteville scored on 57 percent of their shots.

“I was probably most pleased with taking care of the basketball, offensive execution,” head coach Jeff Gard said. “I haven’t seen the final stats yet but I believe it’s going to be an eight [turnovers] which is a season low. I thought the guys did a better job in the second half of coming out and playing with more patience, more poise rather than trying to rush things offensively. Just a little bit better execution from the offensive side of things for us.”