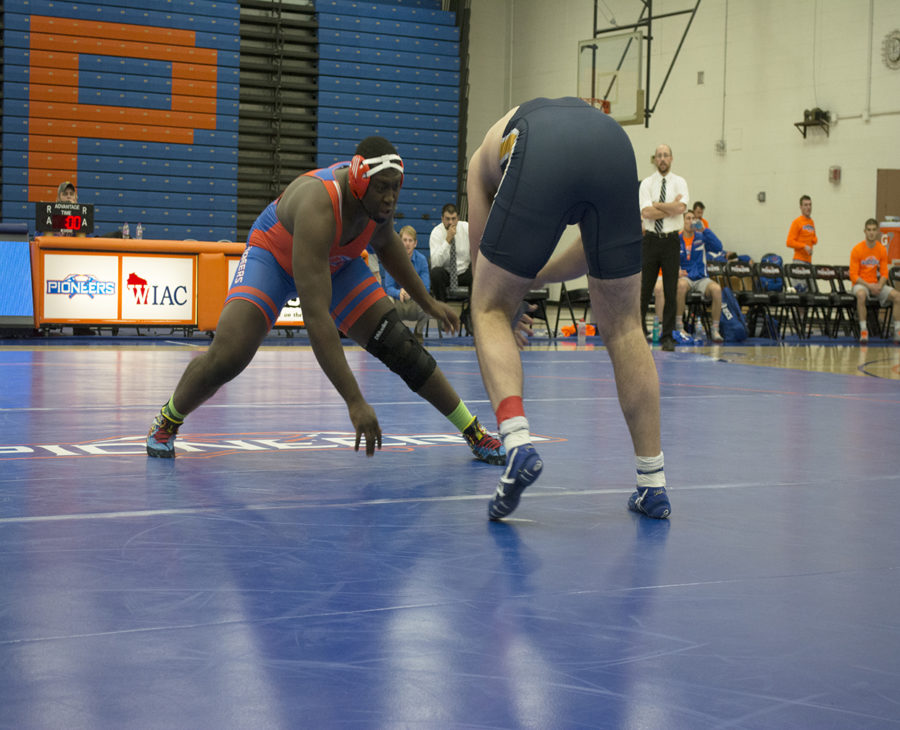 Heavyweight junior D’Andre Johnson won by pinfall to help the Pioneers take control during their dual meet against UW-Eau Claire.

The University of Wisconsin-Platteville wrestling team defeated conference opponent UW-Eau Claire with a final score of 23-17. The match took place at Bo Ryan Court on Saturday Dec. 9 and was the last match that the Pioneers will wrestle in the fall semester. The teams went head-to-head after recently seeing each other at the Milwaukee School of Engineering Invitation on Saturday, Dec. 2.

The Pioneers took command of the match after the intermission with a 12-point swing thanks to pins by heavyweight junior D’Andre Johnson and 125-pound freshman Beau Harrier. Harrier’s match was especially notable because his opponent placed higher than Harrier at the MSOE invite.

“It felt great to be able to contribute to the team victory. I felt like I was prepared and just approached the match the same way I approach any other match,” Harrier said.

The fast paced start to the second half was essential for the Pioneers and gave 133-pound junior Scott Arneson an opportunity to clinch the team victory. Arneson made quick work of his opponent, winning 16-0 by technical fall in the second period. This match was the Pioneers’ final victory of the afternoon and capped off 17 unanswered team points.

The Pioneers will look to continue their success next semester. The wrestling team will begin before the official start of spring semester at Loras College on Saturday, Jan. 6.