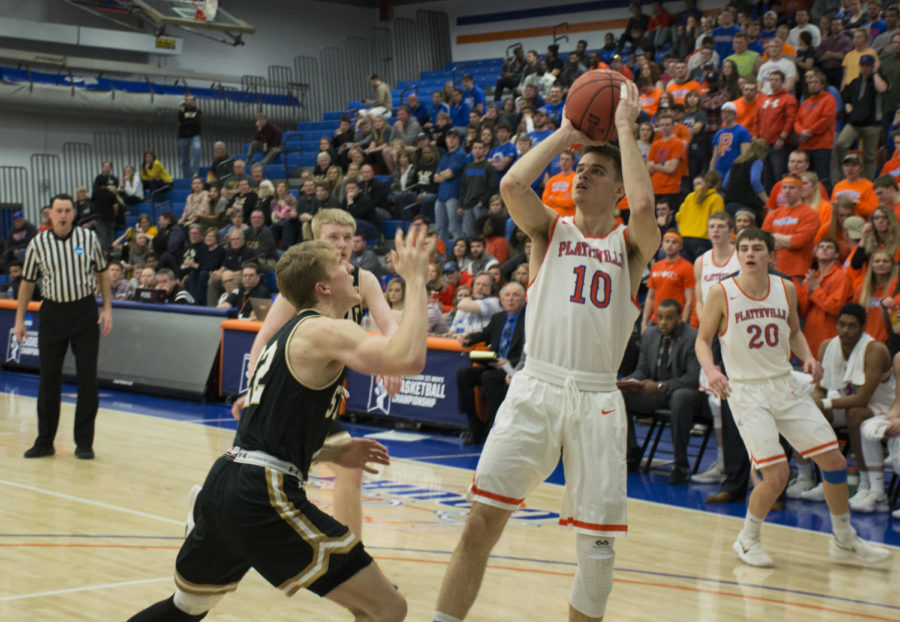 The Pioneer men’s basketball team won their first and second round matchups on March 2 and 3. Two near-sellout crowds showed up on Friday and Saturday to watch the Pioneer’s 91-76 first round victory over Monmouth College and a 74-68 win over St. Olaf. With these two victories, the Pioneers advance to the Sweet Sixteen round of the NCAA Division III tournament for the first time since 1999. Students and Platteville residents alike filled the Bo Ryan Court with chants and cheers supporting the Pioneers.

“The game was exciting, and the Pioneers worked very hard to prove that they are here to win it all. From the students to the parents, the room [Bo Ryan Court] was filled with cheer and clear love for their team, the Pioneers. I was very impressed by the end of the night,” Platteville resident Michelle Kelley said. Kelley also expressed her sure faith in the team’s resiliency even when they were down at certain points.

The Pioneers started their first round match up by gaining a 10-point lead nearly four minutes into the game. The early scoring spree was led by junior guard/forward Robert Duax, who scored seven of those ten points. The lead was short lived as The Fighting Scots immediately started to close the gap. The lead was cut to five with just under fifteen minutes left in the half. By the end of the first half, the Pioneers were able to hold onto a 39-36 lead. The second half started with The Fighting Scots taking the lead through Pioneer fouls, turnovers and missed shots. The Fighting Scots lead did not last as they missed free throws and were outrebounded. Pioneer forward Clay Gerds’ rebound led to a 3-point shot by senior guard, Matt Oestreich to put the Pioneers back on top. Through more Fighting Scots fouls and free-throws by the Pioneers, the game closed with a 91-76 Pioneer victory.

“None of us have played in an NCAA tournament game before, so after beating Monmouth, we felt more relaxed going into the game against St. Olaf. We had a lot of confidence not only from coming off a win but getting to play in front of our home crowd again,” Duax said.

The March 3 matchup against St. Olaf brought victory to the Pioneers a little differently. The Pioneers, again, began the game going up 10-4 with just under 16 minutes left in the first half, but the Oles didn’t go down easily. The Oles were able to keep the game close for some time before they made a three to take a 17-18 lead with ten and a half minutes left in the half. Their lead ended when Duax made a two-point basket to give the Pioneers the lead 25-23. The first half ended with Pioneers leading 33-28. Although the Oles came out of the half to tie the game 33-33, the Pioneers were able to maintain the lead. The Oles continued to answer the Pioneers to keep the game close, tying the game up once more before the Pioneers pulled away. The game ended with a 74-68 Pioneer victory.

Between the two games, the Pioneers shot just under 50 percent. They shot 46.6 percent in two-point range and 32.2 percent from three-point range. The Pioneers only gave up 19 turnovers between both games and managed to pull down 60 rebounds. Duax led the Pioneers in scoring through both games: 20 points against The Fighting Scots and 19 points against the Oles. Duax only committed five fouls and gave up two turnovers between both games.

UW-Platteville will host the Sweet Sixteen and Elite Eight rounds this upcoming weekend. This gives the Pioneers their third tournament home game on March 9. The Elite Eight matchup, March 10, which will consist of the winners of UW-Platteville vs. Wesleyan and Whitman vs. University of Wisconsin Stevens-Point. Tickets for the Sweet Sixteen matchup will go on sale Thursday, March 8 at 1 p.m. for UW-Platteville students. Tickets will also be on sale at the door Friday night.. Tickets are five dollars for students and ten dollars for the general public.