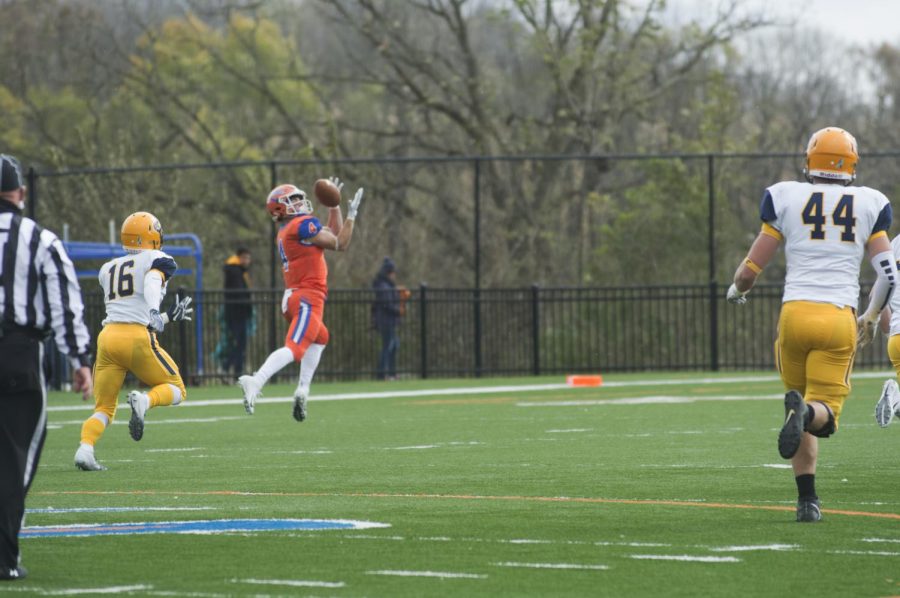 The Pioneer football team suffered a loss to the UW-Eau Claire Blugolds with a final score of 16-40.  The day saw some cold Wisconsin snow fall and winds up to 45 miles per hour, making it a challenging game for both teams.

The Pioneers started the game off strong with a 52-yard touchdown made by junior Tyler Knigge.  A successful kick for the extra point by senior Michael Pratl pulled them ahead 7-0. The Blugolds fought back, finding their way to two touchdowns before halftime, giving them the advantage over the Pioneers.  However, senior Clayton Becker’s blocked extra point attempt allowed for senior Josh Mackie to return for two extra points, bringing the Pioneer’s score to 9-13 going into halftime.

The Blugold’s defense came into the second half of the game strong.  The start of the second half saw a fumble and recovery by Eau-Claire.  The Blugolds made an interception, which led to a touchdown pass for them followed by a failed extra point.  This left the Pioneers behind 9-19.

The Blugolds pushed into the fourth, scoring twice off of a returned interception.  They blocked a Pioneer punt return, adding to their gaining lead and putting the Pioneers at 9-33.  The Pioneers made a redeeming 71-yard drive, which lead to a 47-yard rush by sophomore Bo Babich for a touchdown.  This helped to lessen the gap in the score to 16-33.  The Blugolds ended the game with another touchdown, pulling ahead again and leaving the resulting score for the Pioneers 16-40.

Nationally-known speaker Brenda Tracey, the creator of the #SetTheExpectation campaign, was an honorary captain at this #SetTheExpectationGame.  She walked arm-in-arm to the center of the field with the Pioneer captains. Tracy has dedicated her life to leading discussions dedicated to combatting sexual and physical violence by supporting coaches, young men and boys to become part of the solution through direct outreach and engagement in high school and collegiate athletic programs.  To show their support for the cause, both teams wore #SetTheExpectation ribbons on their helmets.

The Pioneers will have an opportunity for a win when they travel to the University of Wisconsin-La Crosse next Saturday, Oct. 27, with kickoff starting at 1 p.m.