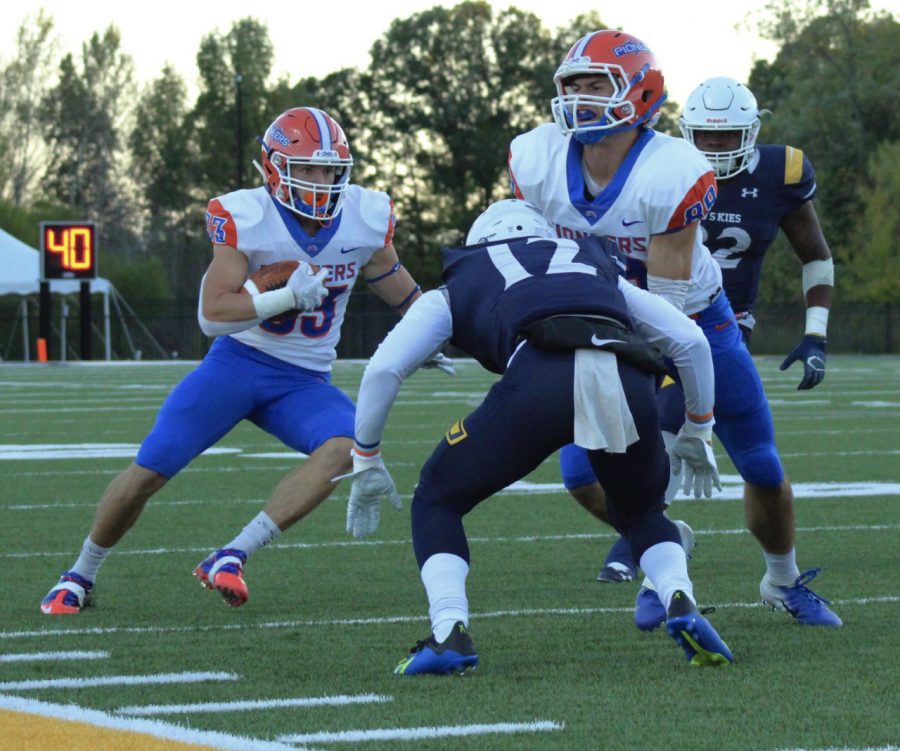 PLYMOUTH, Wis. – The University of Wisconsin-Platteville football team closed out its 2019 non-conference schedule with a 55-28 victory at Lakeland University’s Taylor Field.

Overall, the Pioneers tallied 282 passing yards and 153 rushing yards for an advantage in total offense of 435-412 yards over the Muskies. The Pioneers intercepted Jaidyn Wilson’s passes twice and held him to 10-for-27 (37%) pass completion.

Junior Colin Schuetz passed 22-for-30 for 253 yards and three touchdowns. Senior running back Wyatt Thompson rushed for all three of the first quarter touchdowns and finished the night with nine carries for 67 yards.

Freshman Mitchell McNutt had a team high 11 carries for 79 yards while senior receiver Tyler Knigge led the Pioneers with five receptions for 87 yards and two touchdowns.

Senior Jordan Zilbar led the defense with seven tackles, 2.5 tackles for a loss of eight-yards, and one forced fumble. Senior Tyler Reinhardt intercepted Wilson’s pass for a 25-yard return for a touchdown in addition to two pass break-ups.

Lakeland’s only lead on Saturday came during the game’s first drive, when Wilson found Dezmon Eddie for a 13-yard reception and a Muskie touchdown. A 63-yard return by Ollie on Lakeland’s kickoff put the Pioneers in position on the Muskies’ 36-yard line for a four-play drive that concluded with a 10-yard Thompson rush into the endzone to tie the game 7-7.

Thompson ran for another touchdown during the next possession, this time a 28-yard carry, to give the Pioneers the 14-7 advantage with 5:23 left in the first quarter. He found the endzone for his third touchdown and extended the lead to 21-7 on a 14-yard carry as the first quarter expired.

Lakeland responded and narrowed the lead to 21-14 early in the second quarter, but it was short-lived as Ollie recorded another big kickoff return, this time for 45 yards, to the Lakeland 28 yardline. Schuetz found Knigge the very next play for a 28-yard completion and a touchdown. The teams went to the half with the Pioneers up 28-14.

The Pioneers tacked on another 21 points in the third quarter starting with a 35-yard pass and touchdown from Schuetz to junior Donald Allender. UW-Platteville’s Reinhardt recorded a pick-six off Wilson’s pass before Schuetz found Knigge once again for 13-yard completion and touchdown.

Lakeland made it onto the scoreboard once again with 9:37 left in the game when Eddie rushed 92 yards for a touchdown. The Muskies later completed a 62-yard pass from Wilson to Christian Chatman as the Pioneers led Lakeland 49-28 with less than five minutes remaining. Sophomore Caleb Hanson passed 4-for-8 for 29 yards and rushed in for the Pioneers’ final, and his first career touchdown with seconds remaining in the game to give the final score of 55-28.

The Pioneers will return home next Saturday to open WIAC play against the Eagles of UW-La Crosse in Ralph E. Davis Pioneer Stadium.  Kickoff is set for 1 p.m. on Family Day and Bobblehead Day as free Pioneer Pete bobbleheads will be given away to the first 500 fans through the main gate.