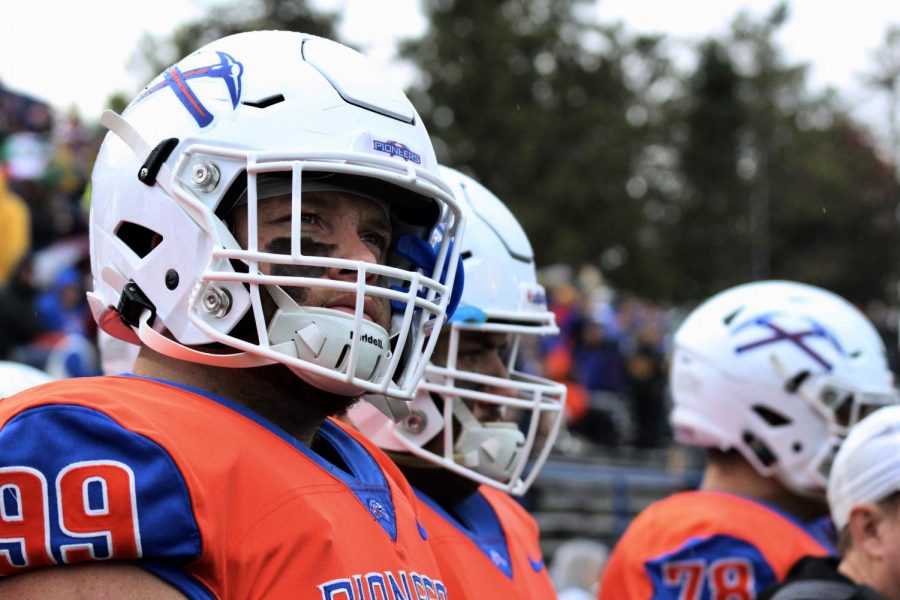 Despite the rainy weather, the Pioneers started the game strong with a 7 – 0 lead, secured by a 31-yard pass and touchdown by Colin Schuetz and Tyler Knigge within the first three minutes of the game. Four minutes later, the Blue Devils tied the game with a 23-yard pass from Sean Borgerding to Tyler Seymour.

The Pioneers ended the first half with a score of 24 – 7 and a 31-yard reception by Platteville’s David Urke, which led to a touchdown.

In the third quarter, the Blue Devils had a 61-yard pass for a touchdown from Sean Borgerding to Levy Hamer and a completion by Seymour, making it his second touchdown of the day. They ended the third quarter with a score of 24 – 20.

The Pioneer’s Andrew Schweigert added to the lead with a 28-yard field goal before Pioneer’s Wyatt Thompson made a 21-yard run for a touchdown, bringing the score to 33 – 20 with 7:45 left on the clock. The Blue Devils threw a 15-yard pass for a touchdown as a final stand, but the Pioneers kneed down twice to end the game with a score of 33 – 27, defeating the Blue Devils.

The Pioneers will hit the road this weekend on Oct. 26 to play against UW-Eau Claire in the WIAC division.

The Pioneers are ranked number 18 nationally in the Top 25 Poll on D3football.com and number 20 in the American Football Coaches Association poll. Their next home game is on Saturday, Nov. 2, against the UW-Oshkosh’s Titans at 1 pm at the Ralph E. Davis Stadium.