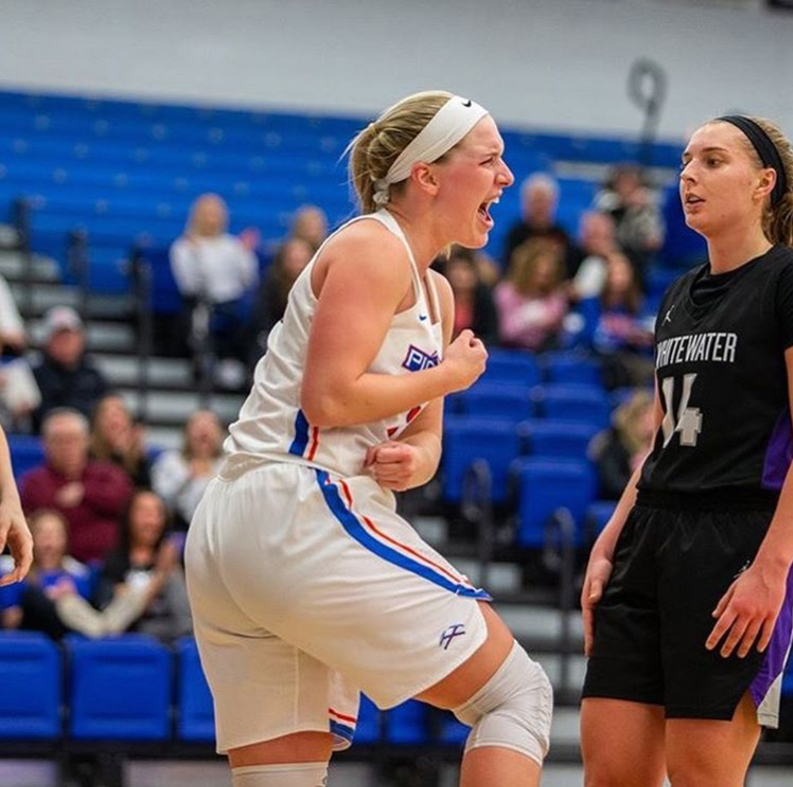 On Feb. 12, the UW-Platteville Pioneer women’s basketball team lost to number four in the nation UW-Whitewater Warhawks at Bo Ryan Court. The Pioneer’s women’s team had a quality first half, leading by 10 with less than two minutes in the first half. The Warhawks came back in the second half and outscored the Pioneers, beating them 59-55.
This past Saturday, Feb. 15, the women’s team took on UW-River Falls. The women played on the road at River Falls and secured a 69-61 win.
Junior psychology major Maiah Domask had 15 points and 8 rebounds, leading the Pioneers to their twelfth win of their season. Following the game, Domask said, “After we got off to a hot start the energy from the bench and the crowd fueled me to keep going.”
The women’s basketball has averaged 63 points a game this season, shooting 27 percent from three-point range. They have yet to win two games in a row this season and have a 12-11 record after Saturday’s game.
At Whitewater on Wednesday Feb. 12 night, the UW-Platteville Pioneer men’s basketball team defeated the Warhawks, 70-68, securing them the number eight spot in the nation on D3hoops.com poll. Senior mechanical engineering major Carter Voelker said, “We found out about 15 minutes before the game that Q, our point guard, was sick and wasn’t going to play so I knew I had to step up even more and really lead everyone and do everything in my power to get the win for him.”
Voelker led the Pioneers in the first half against the Warhawks, scoring 13 points and making 100 percent from the free-throw line. The Pioneers trailed 29-37 going into halftime.
On Saturday Feb. 15, the men’s basketball team took on UW-River Falls. They played at Bo Ryan court and dominated the game, winning 94-54, setting a program record for most three-pointers in a game.
Head coach Jeff Gard, who is on his 11th year of coaching the men’s team, said, “leadership took over in the second half, specifically, Carter Voelker had the never-quit mentality that kept the guys focused and working together.”
Carter Voelker led the men’s team, scoring 30 points and having 9 rebounds. Voelker averages 30 minutes a game and 16 points per game and recently, has had a big impact on the team.
The men’s basketball team has 78 points per game on average, scoring 38 percent from three-point range so far this season. They have a 12-1 record at home and are 20-3 overall. The team has two more games left in their season with a high chance of making it far in the NCAA tournament.