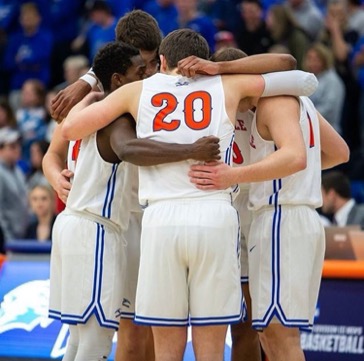 The weekend of March 7, UW-Platteville hosted three games for the Division 3 NCAA Men’s Basketball Tournament. Unfortunately, that’s also where the 8th-ranked Pioneers, who went 23-5 in the regular season, ended their year, with a loss to 4th ranked University of St. Thomas.
On Friday night, the men’s team played and defeated Concordia Wisconsin in the first round of the tournament, 86-74. The Pioneers dominated the first half, leaving Concordia in an 11-point hole, then continued to outscore Concordia in the second half.
Biology major Quentin “Q” Shields only saw 17 minutes of playing time during Friday’s game but managed to lead the Pioneers in scoring with 13 points.
Platteville sophomore civil engineering major Justin Fox had a 10-point game in just 10 minutes. Fox mentioned after the game that his team was well prepared.
“We went into that game with confidence, knowing we were the better team and just worked the ball well,” Fox said.
After Friday’s win, the Pioneers advanced to the second round and played the University of St. Thomas, a team ranked number 4 in the nation.
The game was close even up to the final seconds, but the Tommies held on to their one possession lead to defeat the Pioneers 73-70.
This marks the third season in a row that the Pioneers have played in the NCAA tournament and also the third year in a row that they’ve been eliminated by a loss of three or fewer points.
Platteville senior mechanical engineering major Carter Voelker mentioned how he stepped up and worked hard, but the team put itself in a hole in the first half. Even though his team put everything on the line, it wasn’t enough against his opponents.
Voelker had 8 rebounds and 4 assists against St. Thomas, putting up 19 points in 38 minutes and leading the Pioneers in points for the game.
Head coach Jeff Gard said that “direction from a few players helped the team play exceptionally well. Specifically, Carter Voelker left everything he had on that court: he kept the guys working together.”
Yesterday, Voelker and head coach Jeff Gard were named to the National Association of Basketball Coaches (NABC) Division III All-District team. Voelker was named first team in the Central District and Gard was named Central District’s Coach of the Year, the second time he’s received the honor.
Voelker put 1,157 career points on the board for the Pioneers in his career and leaves as their 24th all-time highest scorer.