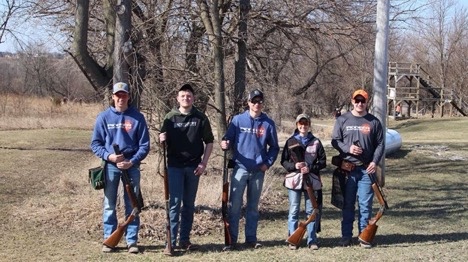 Although the Pioneer Sportsman’s Club has competed in shoots in Illinois and
Minnesota, this was the first time that the club athletes have competed in the ACUI regional event in Iowa.

Tate Peterson also ended the weekend strong with a score of 92 out of 100 in American skeet. The weather was sunny, nearly 70 degrees, with intense wind blowing 30 MPH out of
the south both days.

The shooters are hoping for similar weather during their spring break competition near San Antonio, Texas for the ACUI National Championship. The Pioneer Sportsman’s Club will send two squads (10 students) to compete at the nationals to compete in American trap, doubles trap, American skeet, doubles skeet, sporting clays and super sporting clays events.