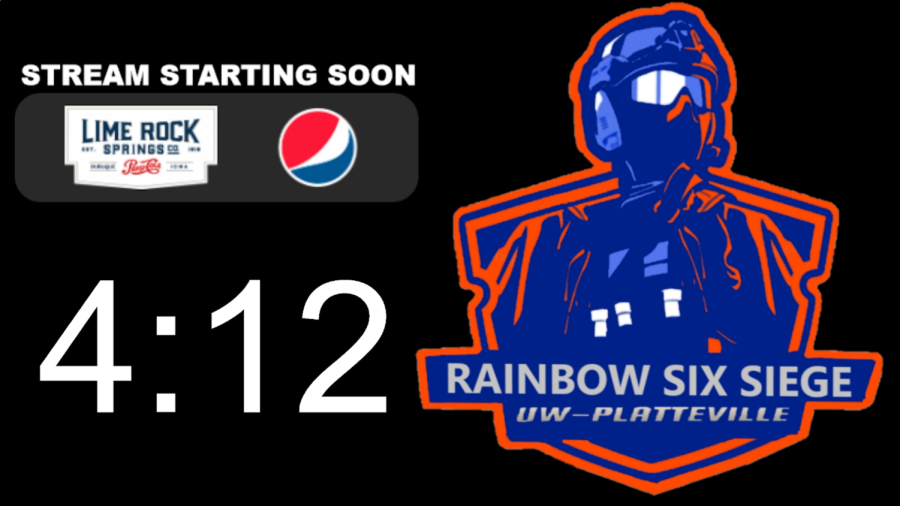 The UW-Platteville Rainbow Six Siege esports team faced off against the UW-Madison team on Nov. 12, which was streamed live on Twitch.

The match was played on the Oregon map, chosen by Platteville. Madison decided to play defense first and started at the bottom level in round one. Platteville played with three subs and worked with some new strategies. Platteville took the lead by taking the first operators out. With 40 seconds left in the first round, Platteville led the fight 3 players on 2 players, but the first round went to Madison as Platteville could not finish planting the bomb in time.

In round two, 40 seconds started the clock with Madison well-reinforced. Platteville took the roof approach and had issues getting out of roaming spots. A hallway was cleared by Madison and deadly C-4 was used to take out two Platteville operators at the same time. Madison won that round.

Platteville changed some of their operators and Madison changed their strategy completely for round three. Madison held down the kitchen, a hard area to defend because it is an open area. With one minute left in the round, Madison led 3 on 1. The round went to Madison when the Ace ended up falling to the Smoke. Madison kept the objective alive and made sure Platteville couldn’t get a glimpse of the defense site.

Madison went back to the basement in round four, a strategy that was in Platteville’s strategic favor during round one. Madison led 5 on 3 with two minutes left after taking out both of Platteville’s hard breachers. Platteville worked to make sure Madison’s roamers were gone, took control of the stairs and led 3 on 2 with one minute remaining. The 3 on 2 took a turn for the worst when Madison used C-4 to take out two of Platteville’s operators again. Madison took round four.

To prepare for round five, Platteville switched Iana to Twitch knowing that Iana didn’t make it very far in the previous round. Platteville led 5 on 3 until there was about one minute and 40 seconds left in the round. It became a 3 on 3 when Madison worked to stop Platteville with roamers and pinned them. The round quickly went to Madison after securing their spot and utilizing the deadly hallway to take Platteville operators out one at a time.

In round six, Platteville ran with two hard breachers and tried to take over the locked-down kitchen, but Madison attacked from the window and led 3 on 2 in a matter of seconds. With 10 seconds left in the round, Platteville got the plant. The close round ended in Madison’s favor because of the time running out.

During round seven, Madison utilized the deadly hallway again and switched to attack. Platteville kept Madison away from their objectives on the top floor and switched to defense. Lots of gunfights were happening as time expired. Platteville led 3 on 1 with 15 seconds left. Platteville eliminated the last Madison operator and took the first round on defense over Madison.

Platteville tried the basement strategy in round eight as Madison made an approach and knew where some of the Platteville operators were. With two minutes left in the round, Madison quickly led 4 on 1 and took the round.

In round nine, Platteville didn’t reinforce the wall between the A and B bombs. Madison attacked from the top while Platteville had to hold on to the top hatch. Very early in the round, Madison led 5 on 4, but Platteville lost the castle as they were trying to roam and Madison led 5 on 3 shortly after. Madison started their droning and readied to drop on the main floor. Platteville did a good job keeping Madison out of the objective. Madison could not get on the site and Platteville took the round.

Platteville took the bedrooms as the game approached round 10. The hallway was the deciding factor for half of the rounds at this point in the game, so Platteville defended the hallway using two operators. Madison took out an operator with two minutes left in the round. Madison continued to try to pin them from the hallways and the window. At one minute left, Madison led 4 on 3. Platteville’s operators were not strategically placed anymore when Madison gained access to the B bomb and the doorway on the top floor, then the A bomb. With ten seconds left, Platteville killed the remaining Madison operator and took the round.

Smoke, Kaid and Goyo seemed to work for Platteville previously so they continued to use this strategy in round 11. Platteville chose to begin in the basement again. Madison made their approach from the construction site while Platteville had no roamers. Both teams caused damage as they tried to get into the building. It was a 4 on 4 fight with a minute and a half left in the round. Madison had control of the stairs and the main part of the bottom floor. Platteville operators walked into Madison’s line of fire and Madison led 3 on 1. Goyo, from Platteville, tried to hang on, but the Sledge knew where he was and Madison took the round.

Madison chose Hibana over the Lion and Platteville used the Vigil, which isn’t detected by drones at all. Platteville began round 12 in the basement again. The Vigil looked like they were going to pull off the hatch. Madison took a different approach and cleared out the building. With two minutes left in the round, it became a 4 on 4 as Sledge took out a Platteville operator, but was then also taken out. The Vigil ended up falling and it became a 3 on 3, but the Nomad was waiting and Madison led 3 on 2. The Smoke was the last Platteville operator alive and made a play, but Madison pulled away from Platteville and took the final round in the UW showdown of the week.

The team hosts their weekly Rainbow Six Siege dinners at the Haus on Thursdays at 6 p.m. and has a weekly meeting following that at 7 p.m. on their Discord.